Nikola (NASDAQ:NKLA – Get Rating) is scheduled to release its earnings data before the market opens on Thursday, May 5th. Analysts expect Nikola to post earnings of ($0.37) per share for the quarter. Persons that wish to register for the company’s earnings conference call can do so using this link.

Nikola (NASDAQ:NKLA – Get Rating) last released its quarterly earnings results on Thursday, February 24th. The company reported ($0.39) earnings per share for the quarter, topping analysts’ consensus estimates of ($0.46) by $0.07. During the same period last year, the firm posted ($0.38) earnings per share. On average, analysts expect Nikola to post $-2 EPS for the current fiscal year and $-2 EPS for the next fiscal year.

About Nikola (Get Rating)

Nikola Corporation operates as a technology innovator and integrator that works to develop energy and transportation solutions. It operates through two business units, Truck and Energy. The Truck business unit develops and commercializes battery hydrogen-electric and battery-electric semi-trucks to the trucking sector. 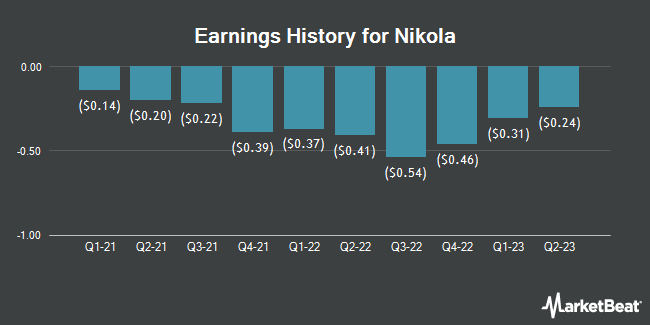 Receive News & Ratings for Nikola Daily - Enter your email address below to receive a concise daily summary of the latest news and analysts' ratings for Nikola and related companies with MarketBeat.com's FREE daily email newsletter.

VersaBank Short Interest Down 78.2% in May

Horizonte Minerals Plc Short Interest Up 7,300.0% in May

Complete the form below to receive the latest headlines and analysts' recommendations for Nikola with our free daily email newsletter: