Rush Enterprises, Inc. (NASDAQ:RUSHA – Get Rating) announced a quarterly dividend on Tuesday, April 26th, Zacks reports. Investors of record on Thursday, May 12th will be paid a dividend of 0.19 per share on Friday, June 10th. This represents a $0.76 annualized dividend and a dividend yield of 1.50%. The ex-dividend date is Wednesday, May 11th.

Rush Enterprises (NASDAQ:RUSHA – Get Rating) last announced its earnings results on Wednesday, February 16th. The company reported $1.18 earnings per share for the quarter, beating the consensus estimate of $0.98 by $0.20. Rush Enterprises had a return on equity of 17.40% and a net margin of 4.71%. The firm had revenue of $1.31 billion for the quarter. During the same period in the previous year, the firm earned $0.72 EPS. As a group, analysts forecast that Rush Enterprises will post 4.55 EPS for the current year.

Several research firms recently weighed in on RUSHA. StockNews.com started coverage on shares of Rush Enterprises in a research report on Thursday, March 31st. They set a “buy” rating for the company. Zacks Investment Research upgraded shares of Rush Enterprises from a “hold” rating to a “buy” rating and set a $60.00 price target for the company in a report on Thursday, February 3rd.

In other Rush Enterprises news, COO Michael Mcroberts sold 8,807 shares of Rush Enterprises stock in a transaction dated Friday, March 4th. The stock was sold at an average price of $49.46, for a total transaction of $435,594.22. The sale was disclosed in a filing with the SEC, which is available through this hyperlink. Insiders own 12.39% of the company’s stock. 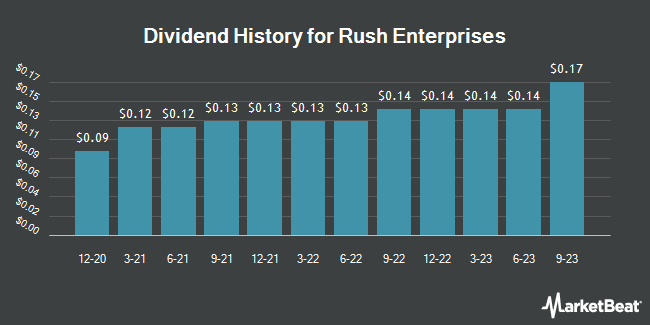 F5, Inc. Given Consensus Recommendation of “Buy” by Analysts

Complete the form below to receive the latest headlines and analysts' recommendations for Rush Enterprises with our free daily email newsletter: