Synaptics (NASDAQ:SYNA – Get Rating) is set to release its earnings data after the market closes on Thursday, May 5th. Analysts expect Synaptics to post earnings of $2.98 per share for the quarter. Persons interested in listening to the company’s earnings conference call can do so using this link.

Synaptics (NASDAQ:SYNA – Get Rating) last issued its quarterly earnings results on Thursday, February 3rd. The software maker reported $2.54 EPS for the quarter, missing the consensus estimate of $2.67 by ($0.13). Synaptics had a return on equity of 30.47% and a net margin of 9.85%. The business had revenue of $420.50 million for the quarter, compared to the consensus estimate of $422.90 million. During the same period last year, the firm earned $1.79 earnings per share. On average, analysts expect Synaptics to post $11 EPS for the current fiscal year and $11 EPS for the next fiscal year.

In other Synaptics news, insider Dean Warren Butler sold 1,448 shares of the stock in a transaction that occurred on Monday, February 7th. The shares were sold at an average price of $209.69, for a total transaction of $303,631.12. The sale was disclosed in a document filed with the SEC, which is available at this hyperlink. Corporate insiders own 0.80% of the company’s stock. 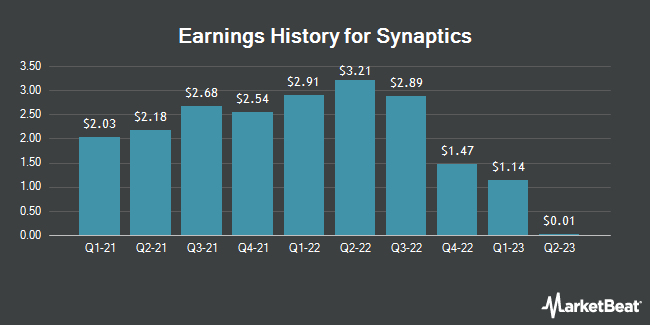 Nestlé S.A. Given Average Recommendation of “Hold” by Brokerages