Velodyne Lidar (NASDAQ:VLDR – Get Rating) is scheduled to be posting its quarterly earnings results after the market closes on Thursday, May 5th. Analysts expect Velodyne Lidar to post earnings of ($0.23) per share for the quarter. Velodyne Lidar has set its Q1 2022 guidance at EPS.Parties that wish to listen to the company’s conference call can do so using this link.

Velodyne Lidar (NASDAQ:VLDR – Get Rating) last released its quarterly earnings results on Monday, February 28th. The company reported ($0.19) earnings per share (EPS) for the quarter, meeting the Zacks’ consensus estimate of ($0.19). Velodyne Lidar had a negative net margin of 345.08% and a negative return on equity of 63.01%. The business had revenue of $17.50 million for the quarter, compared to analyst estimates of $16.55 million. During the same quarter in the previous year, the business earned ($0.64) earnings per share. The firm’s revenue was down 1.7% compared to the same quarter last year. On average, analysts expect Velodyne Lidar to post $-1 EPS for the current fiscal year and $-1 EPS for the next fiscal year.

VLDR has been the subject of several recent analyst reports. Craig Hallum cut Velodyne Lidar from a “hold” rating to a “sell” rating and decreased their target price for the stock from $3.50 to $2.50 in a research report on Tuesday, March 1st. Zacks Investment Research upgraded Velodyne Lidar from a “sell” rating to a “hold” rating in a report on Saturday, April 16th. Needham & Company LLC decreased their price target on shares of Velodyne Lidar from $7.50 to $5.90 and set a “buy” rating for the company in a report on Tuesday, March 1st. Finally, Citigroup dropped their price objective on shares of Velodyne Lidar from $8.00 to $4.50 in a research note on Wednesday, January 19th. One analyst has rated the stock with a sell rating, four have assigned a hold rating and one has assigned a buy rating to the company’s stock. According to MarketBeat.com, Velodyne Lidar currently has an average rating of “Hold” and a consensus price target of $6.98.

In other Velodyne Lidar news, Director Christopher Albert Thomas acquired 20,000 shares of the firm’s stock in a transaction that occurred on Monday, March 14th. The stock was purchased at an average cost of $2.09 per share, for a total transaction of $41,800.00. The transaction was disclosed in a filing with the Securities & Exchange Commission, which is available at this link. Also, major shareholder David S. Hall sold 6,000,000 shares of the stock in a transaction on Thursday, March 3rd. The stock was sold at an average price of $3.07, for a total transaction of $18,420,000.00. The disclosure for this sale can be found here. In the last three months, insiders purchased 95,000 shares of company stock valued at $210,200 and sold 25,771,575 shares valued at $59,483,807. Insiders own 13.30% of the company’s stock.

About Velodyne Lidar (Get Rating) 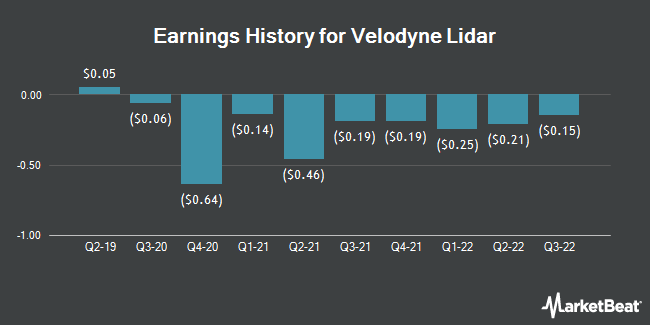 CTI BioPharma Corp. Given Consensus Recommendation of “Buy” by Analysts

Ameren Co. Given Average Rating of “Hold” by Brokerages