Analysts forecast that The Mosaic Company (NYSE:MOS – Get Rating) will announce earnings per share (EPS) of $2.44 for the current quarter, according to Zacks Investment Research. Five analysts have made estimates for Mosaic’s earnings, with estimates ranging from $2.14 to $2.78. Mosaic posted earnings of $0.57 per share during the same quarter last year, which suggests a positive year over year growth rate of 328.1%. The firm is scheduled to issue its next quarterly earnings results after the market closes on Monday, January 1st.

According to Zacks, analysts expect that Mosaic will report full year earnings of $12.27 per share for the current financial year, with EPS estimates ranging from $10.25 to $14.95. For the next financial year, analysts forecast that the firm will post earnings of $9.61 per share, with EPS estimates ranging from $5.47 to $11.96. Zacks’ earnings per share averages are an average based on a survey of sell-side research analysts that cover Mosaic.

Mosaic (NYSE:MOS – Get Rating) last released its quarterly earnings data on Tuesday, February 22nd. The basic materials company reported $1.95 earnings per share for the quarter, meeting analysts’ consensus estimates of $1.95. The firm had revenue of $3.84 billion during the quarter, compared to analyst estimates of $3.93 billion. Mosaic had a return on equity of 18.45% and a net margin of 13.19%. The business’s quarterly revenue was up 56.3% compared to the same quarter last year. During the same quarter in the prior year, the firm posted $0.57 earnings per share.

Several analysts recently issued reports on MOS shares. Berenberg Bank downgraded Mosaic from a “buy” rating to a “hold” rating and set a $50.00 target price on the stock. in a research note on Thursday, February 24th. Royal Bank of Canada boosted their price objective on Mosaic from $80.00 to $85.00 and gave the company an “outperform” rating in a report on Thursday, April 21st. BNP Paribas cut Mosaic from an “outperform” rating to a “neutral” rating and set a $82.00 target price for the company. in a report on Wednesday, April 20th. StockNews.com started coverage on Mosaic in a research report on Thursday, March 31st. They set a “buy” rating on the stock. Finally, Mizuho boosted their price target on Mosaic from $55.00 to $59.00 and gave the company a “buy” rating in a research note on Tuesday, February 15th. One investment analyst has rated the stock with a sell rating, nine have issued a hold rating and eight have issued a buy rating to the stock. According to data from MarketBeat.com, the company presently has a consensus rating of “Hold” and an average price target of $59.94. 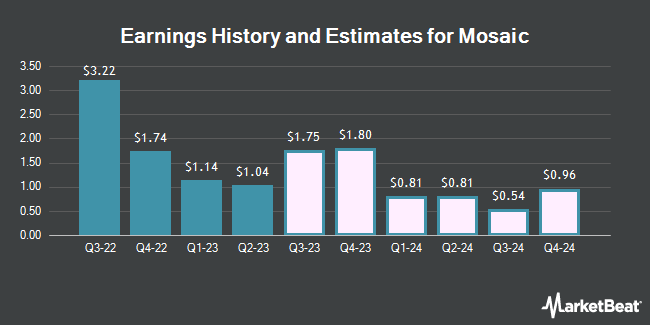 Short Interest in Weyerhaeuser Decreases By 15.8%