Gray Television (NYSE:GTN – Get Rating) is set to post its quarterly earnings results before the market opens on Friday, May 6th. Analysts expect Gray Television to post earnings of $0.25 per share for the quarter. Gray Television has set its Q1 2022 guidance at EPS.Individual interested in registering for the company’s earnings conference call can do so using this link.

Gray Television (NYSE:GTN – Get Rating) last released its quarterly earnings data on Friday, February 25th. The company reported $0.17 earnings per share for the quarter, beating the Thomson Reuters’ consensus estimate of ($0.11) by $0.28. Gray Television had a return on equity of 5.08% and a net margin of 3.73%. The company had revenue of $721.00 million for the quarter, compared to the consensus estimate of $687.25 million. During the same quarter last year, the business posted $2.22 EPS. Gray Television’s revenue for the quarter was down 9.0% on a year-over-year basis. On average, analysts expect Gray Television to post $4 EPS for the current fiscal year and $2 EPS for the next fiscal year.

The business also recently announced a quarterly dividend, which was paid on Thursday, March 31st. Shareholders of record on Tuesday, March 15th were issued a dividend of $0.08 per share. This represents a $0.32 annualized dividend and a yield of 1.69%. The ex-dividend date of this dividend was Monday, March 14th. Gray Television’s payout ratio is presently 82.05%. 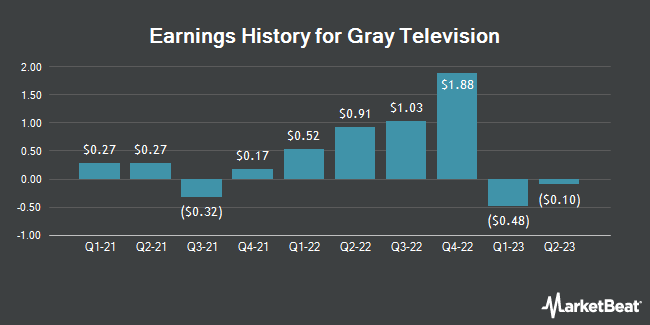