McDonald’s (NYSE:MCD – Get Rating) released its quarterly earnings data on Thursday. The fast-food giant reported $2.28 EPS for the quarter, topping analysts’ consensus estimates of $2.17 by $0.11, MarketWatch Earnings reports. McDonald’s had a negative return on equity of 119.62% and a net margin of 32.49%. The company had revenue of $5.67 billion for the quarter, compared to the consensus estimate of $5.57 billion. During the same period last year, the business posted $1.92 EPS. The company’s quarterly revenue was up 10.6% compared to the same quarter last year.

In other news, Director Catherine M. Engelbert acquired 1,000 shares of McDonald’s stock in a transaction that occurred on Monday, February 28th. The shares were purchased at an average cost of $244.18 per share, for a total transaction of $244,180.00. The transaction was disclosed in a document filed with the Securities & Exchange Commission, which is available through this hyperlink. Corporate insiders own 0.25% of the company’s stock. 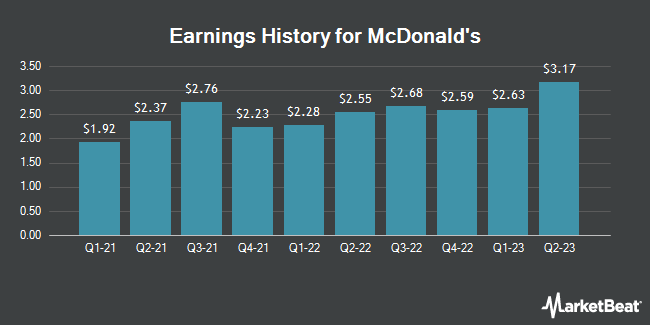 Complete the form below to receive the latest headlines and analysts' recommendations for McDonald's with our free daily email newsletter: