Equities analysts expect Olin Co. (NYSE:OLN – Get Rating) to announce $2.35 billion in sales for the current fiscal quarter, according to Zacks. Four analysts have issued estimates for Olin’s earnings, with estimates ranging from $2.26 billion to $2.45 billion. Olin posted sales of $1.92 billion in the same quarter last year, which would indicate a positive year over year growth rate of 22.4%. The firm is expected to report its next quarterly earnings results after the market closes on Monday, January 1st.

Olin (NYSE:OLN – Get Rating) last released its earnings results on Thursday, January 27th. The specialty chemicals company reported $2.41 earnings per share for the quarter, missing the consensus estimate of $2.53 by ($0.12). The firm had revenue of $2.43 billion during the quarter, compared to analysts’ expectations of $2.39 billion. Olin had a net margin of 14.55% and a return on equity of 59.61%. The business’s revenue was up 46.9% compared to the same quarter last year. During the same quarter last year, the business earned ($0.12) EPS.

The business also recently disclosed a quarterly dividend, which was paid on Friday, March 11th. Stockholders of record on Friday, March 4th were given a dividend of $0.20 per share. This represents a $0.80 dividend on an annualized basis and a dividend yield of 1.50%. The ex-dividend date was Thursday, March 3rd. Olin’s dividend payout ratio is presently 10.06%.

About Olin (Get Rating) 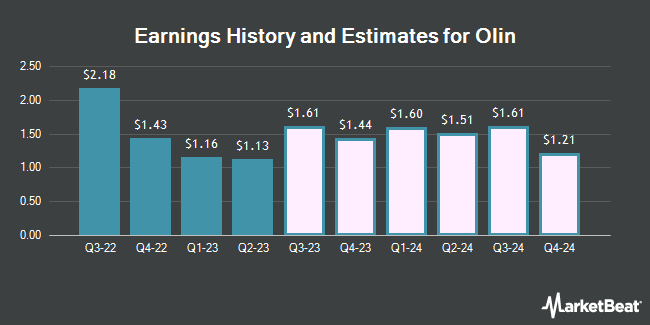 $2.83 Billion in Sales Expected for Hess Co. This Quarter