Tricida, Inc. (NASDAQ:TCDA – Get Rating) major shareholder Brian M. Isern sold 11,804 shares of Tricida stock in a transaction that occurred on Thursday, April 28th. The shares were sold at an average price of $10.61, for a total transaction of $125,240.44. Following the completion of the sale, the insider now owns 770,496 shares of the company’s stock, valued at $8,174,962.56. The transaction was disclosed in a legal filing with the Securities & Exchange Commission, which is available at this link. Large shareholders that own more than 10% of a company’s stock are required to disclose their transactions with the SEC.

Tricida (NASDAQ:TCDA – Get Rating) last issued its quarterly earnings data on Tuesday, March 29th. The company reported ($0.92) earnings per share for the quarter, missing the consensus estimate of ($0.71) by ($0.21). During the same period in the prior year, the company earned ($1.09) EPS. As a group, sell-side analysts predict that Tricida, Inc. will post -2.35 earnings per share for the current fiscal year.

Hedge funds and other institutional investors have recently made changes to their positions in the company. Dorsey Wright & Associates purchased a new stake in Tricida in the 1st quarter valued at about $30,000. Sciencast Management LP purchased a new stake in shares of Tricida during the 1st quarter valued at $190,000. Zurcher Kantonalbank Zurich Cantonalbank raised its position in shares of Tricida by 92.2% during the 1st quarter. Zurcher Kantonalbank Zurich Cantonalbank now owns 3,270 shares of the company’s stock valued at $27,000 after buying an additional 1,569 shares in the last quarter. Belvedere Trading LLC raised its position in Tricida by 11,449.0% in the 1st quarter. Belvedere Trading LLC now owns 22,867 shares of the company’s stock worth $269,000 after purchasing an additional 22,669 shares during the period. Finally, Norges Bank purchased a new position in Tricida in the 4th quarter worth $437,000. Hedge funds and other institutional investors own 88.47% of the company’s stock.

Tricida, Inc operates as a pharmaceutical company. It focuses on the development and commercialization of veverimer (TRC101), a non-absorbed orally-administered polymer that has completed Phase III trial to treat metabolic acidosis in patients with chronic kidney disease by binding and removing acid from the gastrointestinal track. 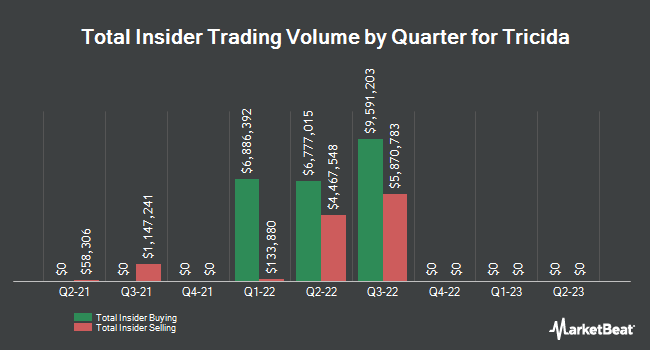 Receive News & Ratings for Tricida Daily - Enter your email address below to receive a concise daily summary of the latest news and analysts' ratings for Tricida and related companies with MarketBeat.com's FREE daily email newsletter.

Littelfuse, Inc. to Issue Quarterly Dividend of $0.53 on June 9th

Complete the form below to receive the latest headlines and analysts' recommendations for Tricida with our free daily email newsletter: