Zacks Investment Research downgraded shares of Diageo (NYSE:DEO – Get Rating) from a hold rating to a sell rating in a research note issued to investors on Friday morning, Zacks.com reports. They currently have $214.00 target price on the stock.

According to Zacks, “Diageo has outpaced the industry in the past year on continued recovery in the on-trade channel, strong consumer demand in the off-trade and market share gains, which also aided the company’s first-half fiscal 2022 performance. The company witnessed sales, operating margin and earnings growth in first-half fiscal 2021 driven by organic sales growth across all regions. Strong recovery in gross margin and operating cost leverage along with higher marketing investments aided organic operating margin growth. Moreover, margin growth was driven by supply productivity savings and price increases, which more than offset the higher cost inflation. It provided a decent view for fiscal 2022, with organic sales momentum likely to continue in the second half of fiscal 2022. However, continued inflationary pressures and currency headwinds are concerning.”

The firm also recently announced a semi-annual dividend, which was paid on Tuesday, April 12th. Shareholders of record on Friday, February 25th were given a dividend of $1.5714 per share. The ex-dividend date was Thursday, February 24th. This represents a dividend yield of 1.9%. 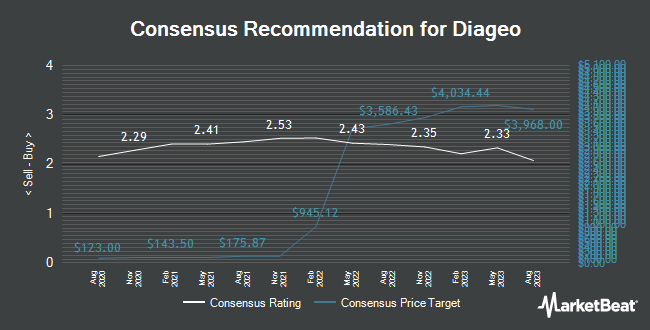 Receive News & Ratings for Diageo Daily - Enter your email address below to receive a concise daily summary of the latest news and analysts' ratings for Diageo and related companies with MarketBeat.com's FREE daily email newsletter.

The Gabelli Convertible and Income Securities Fund Inc. Short Interest Up 77.4% in May

Deswell Industries, Inc. Short Interest Up 77.8% in May

Complete the form below to receive the latest headlines and analysts' recommendations for Diageo with our free daily email newsletter: