Eastern Bankshares, Inc. (NASDAQ:EBC – Get Rating) announced a quarterly dividend on Thursday, April 28th, Zacks reports. Investors of record on Friday, June 3rd will be paid a dividend of 0.10 per share on Wednesday, June 15th. This represents a $0.40 dividend on an annualized basis and a dividend yield of 2.09%. The ex-dividend date of this dividend is Thursday, June 2nd.

Eastern Bankshares (NASDAQ:EBC – Get Rating) last announced its earnings results on Thursday, April 28th. The company reported $0.32 earnings per share for the quarter, beating analysts’ consensus estimates of $0.27 by $0.05. Eastern Bankshares had a net margin of 24.62% and a return on equity of 4.86%. During the same period in the prior year, the company earned $0.27 EPS. Equities research analysts predict that Eastern Bankshares will post 1.17 EPS for the current year.

In related news, Director Luis Borgen sold 46,270 shares of Eastern Bankshares stock in a transaction on Monday, March 14th. The shares were sold at an average price of $20.31, for a total value of $939,743.70. The transaction was disclosed in a legal filing with the SEC, which is available at the SEC website. Insiders own 1.36% of the company’s stock.

EBC has been the topic of a number of recent analyst reports. Zacks Investment Research raised shares of Eastern Bankshares from a “hold” rating to a “buy” rating and set a $24.00 target price on the stock in a research note on Monday, April 4th. Seaport Res Ptn restated a “buy” rating on shares of Eastern Bankshares in a report on Thursday, March 10th. 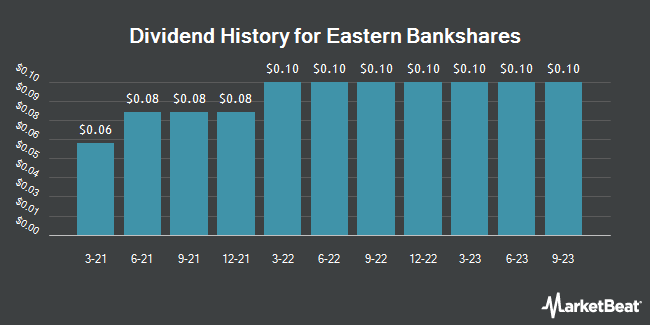