StockNews.com upgraded shares of International Paper (NYSE:IP – Get Rating) from a hold rating to a buy rating in a research note published on Friday morning.

International Paper (NYSE:IP – Get Rating) last announced its quarterly earnings data on Thursday, April 28th. The basic materials company reported $0.76 EPS for the quarter, beating analysts’ consensus estimates of $0.52 by $0.24. International Paper had a return on equity of 17.83% and a net margin of 8.04%. The company had revenue of $5.24 billion during the quarter, compared to the consensus estimate of $4.96 billion. During the same quarter in the prior year, the firm earned $0.76 EPS. The company’s quarterly revenue was up 14.0% compared to the same quarter last year. As a group, research analysts forecast that International Paper will post 4.48 EPS for the current fiscal year.

In other International Paper news, major shareholder Paper Co /New/ International sold 4,132,000 shares of the stock in a transaction on Thursday, April 21st. The shares were sold at an average price of $34.75, for a total transaction of $143,587,000.00. Following the transaction, the insider now directly owns 4,614,358 shares of the company’s stock, valued at $160,348,940.50. The transaction was disclosed in a document filed with the Securities & Exchange Commission, which is available at this link. Corporate insiders own 0.42% of the company’s stock.

About International Paper (Get Rating) 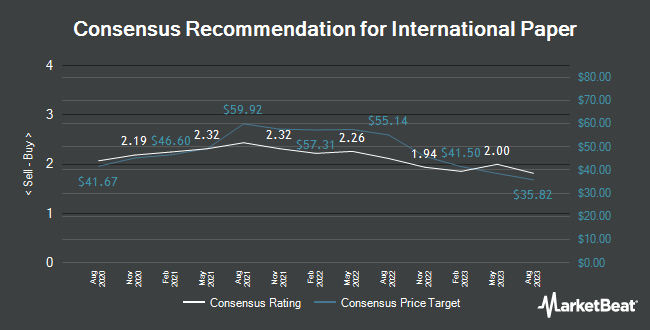 $0.04 Earnings Per Share Expected for QuinStreet, Inc. This Quarter

Critical Analysis: Enovix versus Its Competitors

Complete the form below to receive the latest headlines and analysts' recommendations for International Paper with our free daily email newsletter: