KBR (NYSE:KBR – Get Rating) announced its quarterly earnings data on Thursday. The construction company reported $0.62 EPS for the quarter, topping the Zacks’ consensus estimate of $0.57 by $0.05, MarketWatch Earnings reports. The business had revenue of $1.71 billion during the quarter, compared to the consensus estimate of $1.72 billion. KBR had a return on equity of 21.62% and a net margin of 0.25%. The business’s revenue for the quarter was up 17.3% on a year-over-year basis. During the same period in the previous year, the company posted $0.48 earnings per share. KBR updated its FY22 guidance to $2.53-2.65 EPS.

About KBR (Get Rating)

KBR, Inc provides scientific, technology, and engineering solutions to governments and commercial customers worldwide. The company operates through Government Solutions and Sustainable Technology Solutions segments. The Government Solutions segment offers life-cycle support solutions to defense, intelligence, space, aviation, and other programs and missions for military and other government agencies in the United States, the United Kingdom, and Australia. 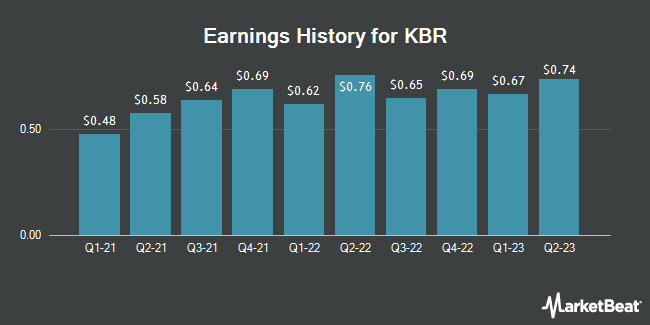