Merchants Bancorp (NASDAQ:MBIN – Get Rating) issued its quarterly earnings data on Thursday. The company reported $1.02 earnings per share (EPS) for the quarter, beating the Thomson Reuters’ consensus estimate of $1.00 by $0.02, Fidelity Earnings reports. Merchants Bancorp had a return on equity of 31.42% and a net margin of 48.40%.

The business also recently disclosed a quarterly dividend, which was paid on Friday, April 1st. Stockholders of record on Tuesday, March 15th were given a $0.07 dividend. This is an increase from Merchants Bancorp’s previous quarterly dividend of $0.06. This represents a $0.28 annualized dividend and a dividend yield of 1.19%. The ex-dividend date was Monday, March 14th. Merchants Bancorp’s dividend payout ratio is currently 5.60%.

In related news, Vice Chairman Randall D. Rogers acquired 12,145 shares of Merchants Bancorp stock in a transaction dated Tuesday, March 15th. The shares were acquired at an average cost of $24.50 per share, for a total transaction of $297,552.50. The transaction was disclosed in a filing with the Securities & Exchange Commission, which can be accessed through this link. 40.75% of the stock is owned by corporate insiders.

Separately, Zacks Investment Research downgraded Merchants Bancorp from a “buy” rating to a “hold” rating in a research report on Tuesday, February 8th. 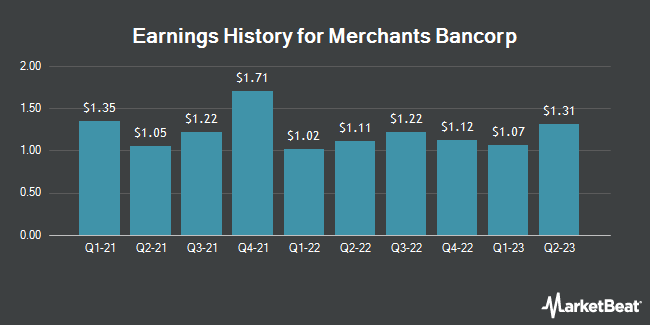