OFS Capital (NASDAQ:OFS – Get Rating) will issue its quarterly earnings data before the market opens on Friday, May 6th. Analysts expect the company to announce earnings of $0.28 per share for the quarter.

OFS Capital (NASDAQ:OFS – Get Rating) last announced its earnings results on Friday, March 4th. The investment management company reported $0.33 earnings per share (EPS) for the quarter, beating the Thomson Reuters’ consensus estimate of $0.25 by $0.08. OFS Capital had a return on equity of 7.38% and a net margin of 119.05%. The company had revenue of $15.27 million for the quarter, compared to analyst estimates of $11.34 million. During the same period in the prior year, the company posted $0.22 EPS. On average, analysts expect OFS Capital to post $1 EPS for the current fiscal year and $1 EPS for the next fiscal year.

The firm also recently announced a quarterly dividend, which was paid on Thursday, March 31st. Investors of record on Thursday, March 24th were given a dividend of $0.28 per share. This is a positive change from OFS Capital’s previous quarterly dividend of $0.25. This represents a $1.12 annualized dividend and a yield of 9.26%. The ex-dividend date of this dividend was Wednesday, March 23rd. OFS Capital’s dividend payout ratio is currently 26.48%.

Several research analysts recently issued reports on the company. StockNews.com assumed coverage on OFS Capital in a research report on Thursday, March 31st. They set a “buy” rating on the stock. Zacks Investment Research upgraded OFS Capital from a “hold” rating to a “strong-buy” rating and set a $13.00 price target on the stock in a research note on Thursday, March 10th. One equities research analyst has rated the stock with a hold rating, two have given a buy rating and one has given a strong buy rating to the company’s stock. According to MarketBeat.com, the company has a consensus rating of “Buy” and a consensus price target of $11.50.

About OFS Capital (Get Rating)

OFS Capital Corporation is a business development company specializing in direct and fund investments as well as add-on acquisitions. It provides flexible capital solutions primarily through debt capital and to a lesser extent, minority equity investments serving the needs of U.S.-based middle-market companies across a broad array of industries. 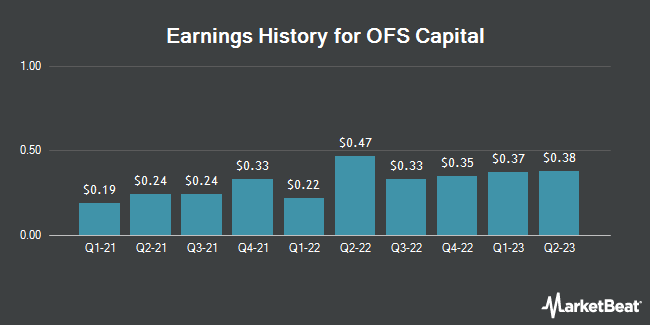 Complete the form below to receive the latest headlines and analysts' recommendations for OFS Capital with our free daily email newsletter: