The Shyft Group (NASDAQ:SHYF – Get Rating) posted its quarterly earnings results on Thursday. The company reported ($0.06) earnings per share for the quarter, topping analysts’ consensus estimates of ($0.08) by $0.02, MarketWatch Earnings reports. The Shyft Group had a return on equity of 28.57% and a net margin of 6.95%. The business had revenue of $206.90 million for the quarter, compared to the consensus estimate of $189.92 million. During the same period in the prior year, the business earned $0.32 EPS. The firm’s revenue for the quarter was up 4.5% on a year-over-year basis. The Shyft Group updated its FY22 guidance to $0.75-1.41 EPS.

The business also recently disclosed a quarterly dividend, which was paid on Thursday, March 17th. Shareholders of record on Thursday, February 17th were issued a dividend of $0.05 per share. This is a positive change from The Shyft Group’s previous quarterly dividend of $0.03. This represents a $0.20 dividend on an annualized basis and a yield of 0.79%. The ex-dividend date was Wednesday, February 16th. The Shyft Group’s payout ratio is currently 13.61%.

In other The Shyft Group news, Director Thomas R. Clevinger sold 5,000 shares of the business’s stock in a transaction that occurred on Thursday, March 10th. The stock was sold at an average price of $39.27, for a total transaction of $196,350.00. The sale was disclosed in a document filed with the Securities & Exchange Commission, which can be accessed through this link. Insiders own 2.26% of the company’s stock.

About The Shyft Group (Get Rating)

The Shyft Group, Inc manufactures and assembles specialty vehicles for the commercial vehicle and recreational vehicle industries in the United States and internationally. It operates in two segments, Fleet Vehicles and Services, and Specialty Vehicles. The Fleet Vehicles and Services segment manufactures and sells commercial vehicles used in the e-commerce/last mile/parcel delivery, beverage and grocery delivery, laundry and linen, mobile retail, and trades and construction industries. 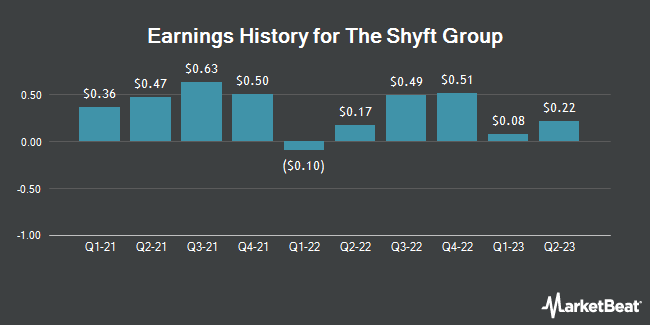 Complete the form below to receive the latest headlines and analysts' recommendations for The Shyft Group with our free daily email newsletter: