KKR & Co. Inc. (NYSE:KKR – Get Rating) was downgraded by equities researchers at The Goldman Sachs Group from a “buy” rating to a “neutral” rating in a report released on Sunday, The Fly reports.

KKR & Co. Inc. (NYSE:KKR – Get Rating) last posted its quarterly earnings results on Tuesday, February 8th. The asset manager reported $1.59 earnings per share (EPS) for the quarter, beating analysts’ consensus estimates of $1.11 by $0.48. The company had revenue of $962.79 million for the quarter, compared to analyst estimates of $826.04 million. KKR & Co. Inc. had a return on equity of 7.27% and a net margin of 31.42%. During the same quarter last year, the company earned $0.49 EPS. On average, sell-side analysts expect that KKR & Co. Inc. will post 3.97 earnings per share for the current fiscal year.

In related news, Director Matt Cohler purchased 8,683 shares of the company’s stock in a transaction on Thursday, February 24th. The stock was bought at an average price of $58.26 per share, with a total value of $505,871.58. The acquisition was disclosed in a document filed with the Securities & Exchange Commission, which is accessible through this link. Company insiders own 39.34% of the company’s stock. 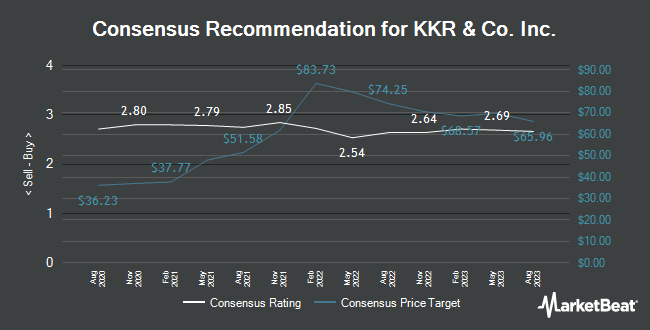 Complete the form below to receive the latest headlines and analysts' recommendations for KKR & Co. Inc. with our free daily email newsletter: