Equities research analysts expect Hercules Capital, Inc. (NYSE:HTGC – Get Rating) to announce earnings of $0.31 per share for the current quarter, according to Zacks. Three analysts have made estimates for Hercules Capital’s earnings. The lowest EPS estimate is $0.31 and the highest is $0.32. Hercules Capital posted earnings per share of $0.29 during the same quarter last year, which would suggest a positive year-over-year growth rate of 6.9%. The company is scheduled to announce its next earnings report after the market closes on Monday, January 1st.

On average, analysts expect that Hercules Capital will report full-year earnings of $1.35 per share for the current financial year, with EPS estimates ranging from $1.28 to $1.43. For the next financial year, analysts anticipate that the firm will report earnings of $1.44 per share, with EPS estimates ranging from $1.32 to $1.58. Zacks Investment Research’s EPS calculations are an average based on a survey of research firms that that provide coverage for Hercules Capital.

Hercules Capital (NYSE:HTGC – Get Rating) last released its quarterly earnings data on Tuesday, February 22nd. The financial services provider reported $0.35 earnings per share (EPS) for the quarter, beating the consensus estimate of $0.33 by $0.02. The company had revenue of $72.50 million during the quarter, compared to analysts’ expectations of $70.86 million. Hercules Capital had a net margin of 61.98% and a return on equity of 11.28%. The firm’s quarterly revenue was down 3.7% on a year-over-year basis. During the same period in the previous year, the company earned $0.37 EPS.

The firm also recently disclosed a quarterly dividend, which was paid on Wednesday, March 16th. Stockholders of record on Wednesday, March 9th were paid a $0.33 dividend. The ex-dividend date was Tuesday, March 8th. This represents a $1.32 dividend on an annualized basis and a dividend yield of 7.79%. Hercules Capital’s payout ratio is currently 92.31%. 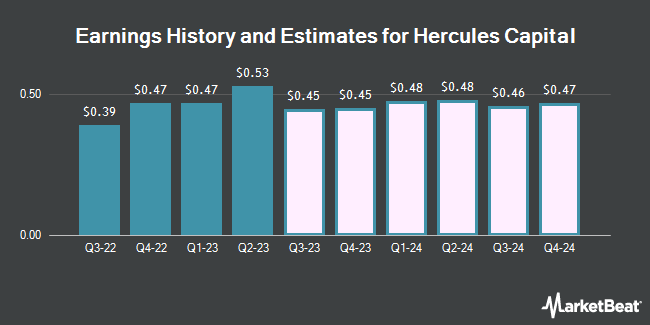 Clene Inc. Given Average Rating of “Buy” by Brokerages

ADMA Biologics, Inc. Given Consensus Recommendation of “Buy” by Analysts