Intevac (NASDAQ:IVAC – Get Rating) will issue its quarterly earnings data after the market closes on Monday, May 9th. Persons that wish to listen to the company’s earnings conference call can do so using this link.

Intevac (NASDAQ:IVAC – Get Rating) last issued its quarterly earnings results on Wednesday, February 9th. The electronics maker reported ($0.29) earnings per share for the quarter. The company had revenue of $15.92 million for the quarter. Intevac had a negative return on equity of 23.08% and a net margin of 43.81%.

In related news, CEO Nigel Hunton purchased 10,000 shares of Intevac stock in a transaction dated Thursday, February 24th. The stock was bought at an average cost of $4.96 per share, for a total transaction of $49,600.00. The transaction was disclosed in a document filed with the SEC, which is available at the SEC website. Also, CFO James P. Moniz sold 27,150 shares of the business’s stock in a transaction that occurred on Wednesday, February 9th. The stock was sold at an average price of $5.54, for a total value of $150,411.00. The disclosure for this sale can be found here. 7.70% of the stock is currently owned by company insiders. 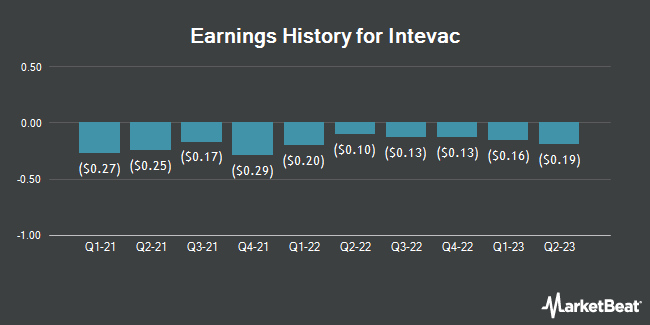 Receive News & Ratings for Intevac Daily - Enter your email address below to receive a concise daily summary of the latest news and analysts' ratings for Intevac and related companies with MarketBeat.com's FREE daily email newsletter.

FIGS and Its Competitors Critical Analysis

Complete the form below to receive the latest headlines and analysts' recommendations for Intevac with our free daily email newsletter: