Johnson Outdoors (NASDAQ:JOUT – Get Rating) is scheduled to be announcing its earnings results before the market opens on Monday, May 9th. Investors interested in participating in the company’s conference call can do so using this link.

The firm also recently declared a quarterly dividend, which was paid on Thursday, April 28th. Shareholders of record on Thursday, April 14th were given a dividend of $0.30 per share. This represents a $1.20 dividend on an annualized basis and a yield of 1.57%. The ex-dividend date was Wednesday, April 13th. Johnson Outdoors’s dividend payout ratio is presently 16.39%.

Separately, StockNews.com started coverage on shares of Johnson Outdoors in a research report on Thursday, March 31st. They set a “buy” rating for the company.

In other news, CFO David W. Johnson sold 1,000 shares of Johnson Outdoors stock in a transaction that occurred on Monday, March 28th. The shares were sold at an average price of $80.08, for a total transaction of $80,080.00. The transaction was disclosed in a document filed with the Securities & Exchange Commission, which is available through the SEC website. 27.69% of the stock is owned by insiders. 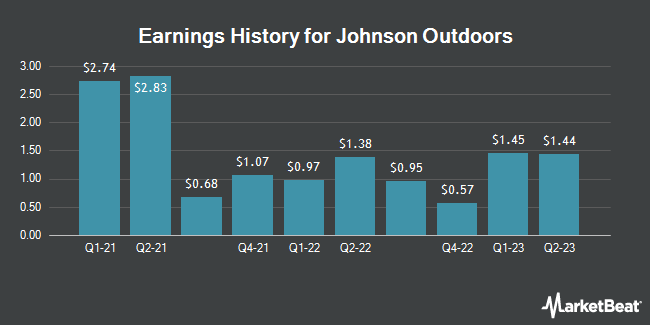 PJT Partners Inc. Given Consensus Recommendation of “Buy” by Brokerages