Shares of Kymera Therapeutics, Inc. (NASDAQ:KYMR – Get Rating) have earned a consensus rating of “Buy” from the twelve brokerages that are currently covering the stock, Marketbeat Ratings reports. Four analysts have rated the stock with a hold recommendation and eight have issued a buy recommendation on the company. The average twelve-month price target among analysts that have updated their coverage on the stock in the last year is $69.33.

Kymera Therapeutics (NASDAQ:KYMR – Get Rating) last issued its quarterly earnings data on Thursday, February 24th. The company reported ($0.66) earnings per share (EPS) for the quarter, missing the Thomson Reuters’ consensus estimate of ($0.36) by ($0.30). The business had revenue of $15.30 million for the quarter, compared to analyst estimates of $21.31 million. Kymera Therapeutics had a negative return on equity of 27.16% and a negative net margin of 137.60%. The business’s quarterly revenue was up 19.5% on a year-over-year basis. During the same quarter in the prior year, the firm posted ($0.29) earnings per share. As a group, equities research analysts forecast that Kymera Therapeutics will post -2.32 earnings per share for the current year.

About Kymera Therapeutics (Get Rating)

Kymera Therapeutics, Inc, a biopharmaceutical company, focuses on discovering and developing novel small molecule therapeutics that selectively degrade disease-causing proteins by harnessing the body's own natural protein degradation system. It engages in developing IRAK4 program, which is in Phase I clinical trial for the treatment of immunology-inflammation diseases, including hidradenitis suppurativa, atopic dermatitis, macrophage activation syndrome, general pustular psoriasis, and rheumatoid arthritis; IRAKIMiD program to treat MYD88-mutated diffuse large B cell lymphoma; STAT3 program for the treatment of hematologic malignancies and solid tumors, as well as autoimmune diseases and fibrosis; and MDM2 program to treat hematological malignancies and solid tumors. 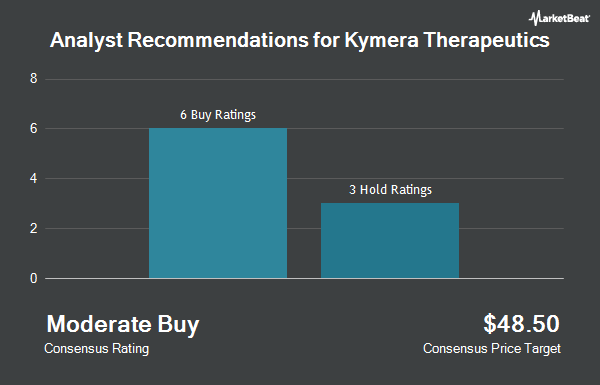 Complete the form below to receive the latest headlines and analysts' recommendations for Kymera Therapeutics with our free daily email newsletter: