Shares of Marqeta, Inc. (NASDAQ:MQ – Get Rating) have been assigned an average recommendation of “Buy” from the eighteen research firms that are presently covering the company, MarketBeat.com reports. One equities research analyst has rated the stock with a sell recommendation, five have given a hold recommendation and eleven have assigned a buy recommendation to the company. The average twelve-month price target among brokers that have covered the stock in the last year is $20.47.

MQ has been the topic of several recent analyst reports. Keefe, Bruyette & Woods decreased their price objective on shares of Marqeta from $17.00 to $13.00 and set a “market perform” rating on the stock in a research report on Thursday, March 10th. Morgan Stanley started coverage on Marqeta in a report on Monday, April 4th. They set an “equal weight” rating and a $15.00 price target on the stock. The Goldman Sachs Group assumed coverage on Marqeta in a research note on Tuesday, January 18th. They issued a “neutral” rating and a $18.00 price objective for the company. William Blair reissued an “outperform” rating on shares of Marqeta in a research note on Thursday, March 10th. Finally, Barclays upped their price target on Marqeta from $17.00 to $19.00 and gave the stock an “overweight” rating in a research note on Wednesday, April 6th.

Marqeta (NASDAQ:MQ – Get Rating) last released its earnings results on Wednesday, March 9th. The company reported ($0.07) earnings per share (EPS) for the quarter, topping the Thomson Reuters’ consensus estimate of ($0.09) by $0.02. Marqeta had a negative net margin of 31.70% and a negative return on equity of 14.51%. The company had revenue of $155.41 million during the quarter, compared to analyst estimates of $137.79 million. The firm’s quarterly revenue was up 76.2% compared to the same quarter last year. On average, equities analysts predict that Marqeta will post -0.37 EPS for the current fiscal year. 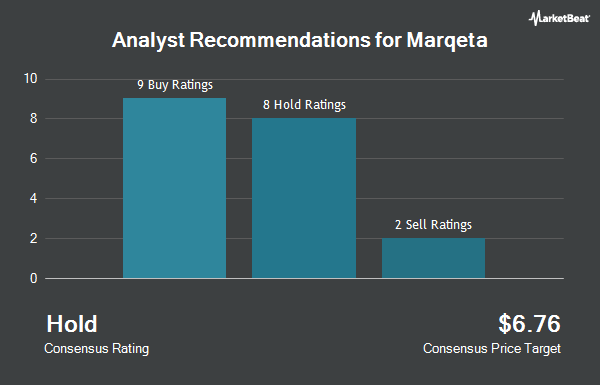