Synaptics (NASDAQ:SYNA – Get Rating) had its price objective reduced by investment analysts at Cowen from $310.00 to $210.00 in a report released on Monday, Stock Target Advisor reports. Cowen’s target price would suggest a potential upside of 38.00% from the company’s current price.

SYNA has been the subject of a number of other reports. Zacks Investment Research raised Synaptics from a “sell” rating to a “hold” rating in a research report on Thursday. Wells Fargo & Company assumed coverage on Synaptics in a research report on Thursday, April 7th. They set an “equal weight” rating and a $185.00 target price for the company. Mizuho cut their price target on Synaptics from $290.00 to $250.00 and set a “buy” rating on the stock in a report on Monday, April 18th. Needham & Company LLC lifted their price target on Synaptics from $320.00 to $340.00 and gave the company a “buy” rating in a report on Friday, February 4th. Finally, StockNews.com assumed coverage on Synaptics in a report on Thursday, March 31st. They issued a “hold” rating on the stock. Four investment analysts have rated the stock with a hold rating and eleven have issued a buy rating to the stock. According to MarketBeat.com, the stock currently has a consensus rating of “Buy” and an average target price of $261.43.

Synaptics (NASDAQ:SYNA – Get Rating) last issued its earnings results on Thursday, February 3rd. The software maker reported $2.54 earnings per share for the quarter, missing the Zacks’ consensus estimate of $2.67 by ($0.13). The firm had revenue of $420.50 million for the quarter, compared to the consensus estimate of $422.90 million. Synaptics had a net margin of 9.85% and a return on equity of 30.47%. During the same period last year, the firm earned $1.79 earnings per share. As a group, sell-side analysts predict that Synaptics will post 10.61 earnings per share for the current fiscal year.

In other Synaptics news, insider Dean Warren Butler sold 1,448 shares of the business’s stock in a transaction dated Monday, February 7th. The stock was sold at an average price of $209.69, for a total transaction of $303,631.12. The transaction was disclosed in a filing with the SEC, which is accessible through this hyperlink. 0.80% of the stock is currently owned by insiders. 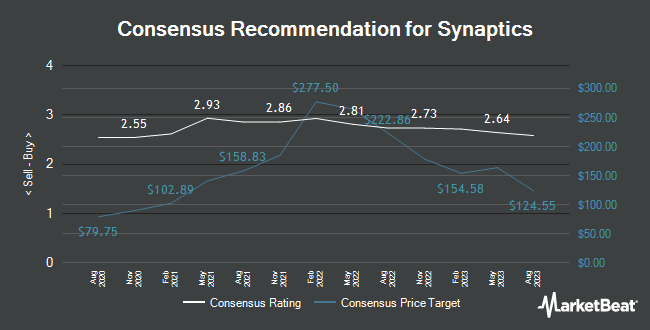 Deep Lake Capital Acquisition Corp. Short Interest Up 80.8% in May

DHC Acquisition Corp. Short Interest Up 76.4% in May