Teledyne Technologies Incorporated (NYSE:TDY – Get Rating) has earned an average rating of “Hold” from the seven brokerages that are currently covering the company, Marketbeat reports. One investment analyst has rated the stock with a sell recommendation, two have given a hold recommendation and four have assigned a buy recommendation to the company. The average 1 year price target among brokers that have covered the stock in the last year is $507.80.

Several research firms have weighed in on TDY. Needham & Company LLC dropped their target price on shares of Teledyne Technologies from $560.00 to $520.00 and set a “buy” rating on the stock in a research report on Friday, January 28th. StockNews.com assumed coverage on shares of Teledyne Technologies in a report on Thursday, March 31st. They set a “hold” rating on the stock.

Teledyne Technologies (NYSE:TDY – Get Rating) last released its quarterly earnings results on Wednesday, April 27th. The scientific and technical instruments company reported $4.27 EPS for the quarter, beating analysts’ consensus estimates of $4.09 by $0.18. Teledyne Technologies had a return on equity of 10.99% and a net margin of 11.17%. The company had revenue of $1.32 billion during the quarter, compared to analysts’ expectations of $1.33 billion. During the same period last year, the business posted $3.02 earnings per share. The firm’s revenue was up 64.0% compared to the same quarter last year. As a group, research analysts forecast that Teledyne Technologies will post 17.95 EPS for the current year.

About Teledyne Technologies (Get Rating)

Teledyne Technologies Incorporated provides enabling technologies for industrial growth markets in the United States, Canada, the United Kingdom, Belgium, the Netherlands, and internationally. The company's Instrumentation segment offers monitoring and control instruments for marine, environmental, industrial, and other applications, as well as electronic test and measurement equipment; and power and communications connectivity devices for distributed instrumentation systems and sensor networks. 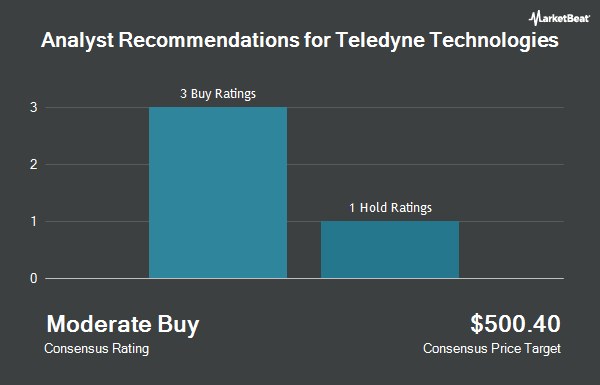 Complete the form below to receive the latest headlines and analysts' recommendations for Teledyne Technologies with our free daily email newsletter: