Vince (NYSE:VNCE – Get Rating) released its earnings results on Friday. The textile maker reported ($0.23) EPS for the quarter, missing the Thomson Reuters’ consensus estimate of ($0.07) by ($0.16), MarketWatch Earnings reports. Vince had a negative net margin of 5.25% and a negative return on equity of 26.81%. During the same quarter last year, the firm earned ($0.48) EPS.

In related news, CEO Jonathan Schwefel sold 4,585 shares of the company’s stock in a transaction dated Wednesday, March 30th. The shares were sold at an average price of $8.06, for a total transaction of $36,955.10. The sale was disclosed in a filing with the SEC, which is accessible through the SEC website. In the last ninety days, insiders sold 9,644 shares of company stock worth $78,645. 74.00% of the stock is owned by insiders.

A hedge fund recently raised its stake in Vince stock. Morgan Stanley lifted its position in Vince Holding Corp. (NYSE:VNCE – Get Rating) by 2,032.5% during the second quarter, according to its most recent 13F filing with the Securities and Exchange Commission (SEC). The firm owned 2,623 shares of the textile maker’s stock after acquiring an additional 2,500 shares during the period. Morgan Stanley’s holdings in Vince were worth $26,000 at the end of the most recent quarter. 5.74% of the stock is owned by institutional investors.

Separately, Zacks Investment Research raised shares of Vince from a “strong sell” rating to a “hold” rating in a report on Thursday, February 10th.

About Vince (Get Rating) 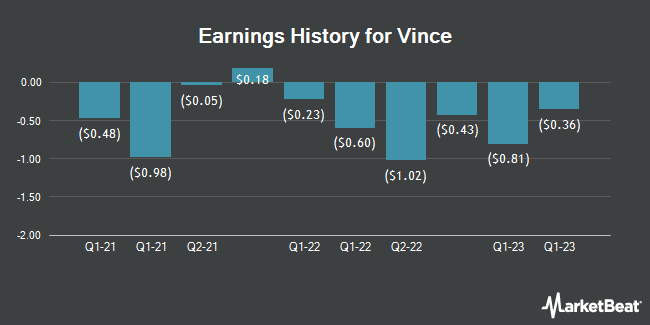 Receive News & Ratings for Vince Daily - Enter your email address below to receive a concise daily summary of the latest news and analysts' ratings for Vince and related companies with MarketBeat.com's FREE daily email newsletter.

Complete the form below to receive the latest headlines and analysts' recommendations for Vince with our free daily email newsletter: