Shares of Ally Financial Inc. (NYSE:ALLY – Get Rating) have received an average rating of “Buy” from the fourteen research firms that are currently covering the company, Marketbeat.com reports. Five research analysts have rated the stock with a hold rating and nine have given a buy rating to the company. The average 1-year price target among brokers that have covered the stock in the last year is $59.92.

The company also recently disclosed a quarterly dividend, which will be paid on Monday, May 16th. Stockholders of record on Monday, May 2nd will be issued a $0.30 dividend. The ex-dividend date is Friday, April 29th. This represents a $1.20 dividend on an annualized basis and a dividend yield of 2.96%. Ally Financial’s dividend payout ratio (DPR) is 15.09%.

In other Ally Financial news, insider Jason E. Schugel sold 2,500 shares of Ally Financial stock in a transaction that occurred on Tuesday, April 19th. The shares were sold at an average price of $45.00, for a total transaction of $112,500.00. Following the transaction, the insider now directly owns 82,476 shares of the company’s stock, valued at $3,711,420. The sale was disclosed in a filing with the SEC, which is available at this link. Insiders own 0.57% of the company’s stock. 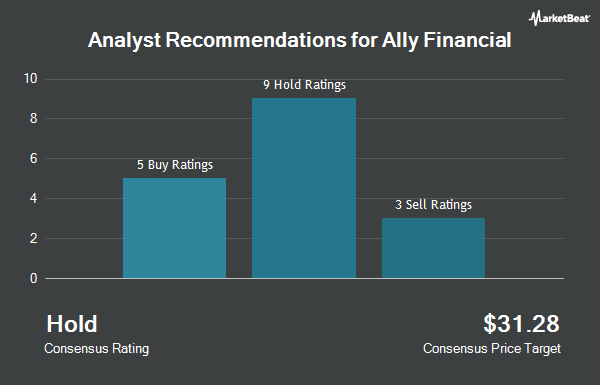 Eli Lilly and Upgraded by StockNews.com to “Strong-Buy”

Short Interest in Scion Tech Growth I Decreases By 74.6%

Scion Tech Growth I Short Interest Up 206.7% in May

Complete the form below to receive the latest headlines and analysts' recommendations for Ally Financial with our free daily email newsletter: