Equities research analysts expect that Amphenol Co. (NYSE:APH – Get Rating) will announce $2.93 billion in sales for the current fiscal quarter, Zacks reports. Four analysts have made estimates for Amphenol’s earnings, with the lowest sales estimate coming in at $2.92 billion and the highest estimate coming in at $2.94 billion. Amphenol reported sales of $2.65 billion in the same quarter last year, which indicates a positive year-over-year growth rate of 10.6%. The company is expected to issue its next earnings results on Monday, January 1st.

Amphenol (NYSE:APH – Get Rating) last posted its quarterly earnings data on Wednesday, April 27th. The electronics maker reported $0.67 EPS for the quarter, topping the Zacks’ consensus estimate of $0.61 by $0.06. Amphenol had a net margin of 14.73% and a return on equity of 26.69%. The company had revenue of $2.95 billion during the quarter, compared to the consensus estimate of $2.76 billion. During the same period in the prior year, the business posted $0.52 EPS. The company’s quarterly revenue was up 24.2% on a year-over-year basis.

The business also recently declared a quarterly dividend, which was paid on Wednesday, April 13th. Shareholders of record on Tuesday, March 22nd were issued a $0.20 dividend. The ex-dividend date of this dividend was Monday, March 21st. This represents a $0.80 annualized dividend and a yield of 1.12%. Amphenol’s dividend payout ratio is currently 29.74%.

Amphenol Corporation, together with its subsidiaries, primarily designs, manufactures, and markets electrical, electronic, and fiber optic connectors in the United States, China, and internationally. It operates through three segments: Harsh Environment Solutions, Communications Solutions, and Interconnect and Sensor Systems. 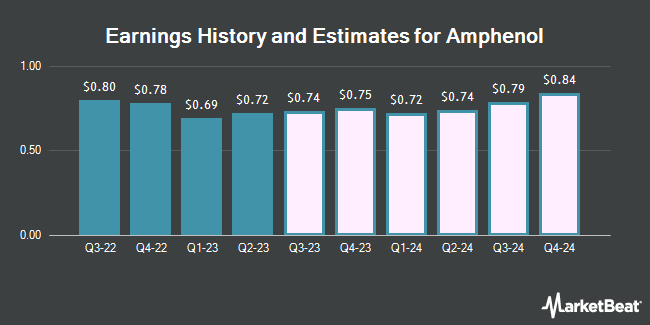 Receive News & Ratings for Amphenol Daily - Enter your email address below to receive a concise daily summary of the latest news and analysts' ratings for Amphenol and related companies with MarketBeat.com's FREE daily email newsletter.

Complete the form below to receive the latest headlines and analysts' recommendations for Amphenol with our free daily email newsletter: