CEVA (NASDAQ:CEVA – Get Rating) is scheduled to be issuing its quarterly earnings data before the market opens on Tuesday, May 10th. Analysts expect the company to announce earnings of $0.04 per share for the quarter. Parties that wish to register for the company’s conference call can do so using this link.

CEVA (NASDAQ:CEVA – Get Rating) last announced its quarterly earnings results on Tuesday, February 15th. The semiconductor company reported $0.12 earnings per share (EPS) for the quarter, beating the Thomson Reuters’ consensus estimate of $0.04 by $0.08. CEVA had a net margin of 0.32% and a return on equity of 1.15%. The firm had revenue of $34.10 million during the quarter, compared to analysts’ expectations of $32.68 million. During the same period in the prior year, the company posted $0.06 EPS. The company’s revenue was up 21.4% on a year-over-year basis. On average, analysts expect CEVA to post $0 EPS for the current fiscal year and $0 EPS for the next fiscal year.

In related news, EVP Issachar Ohana sold 6,000 shares of the stock in a transaction on Wednesday, March 16th. The shares were sold at an average price of $38.68, for a total transaction of $232,080.00. The sale was disclosed in a document filed with the SEC, which can be accessed through this link. 2.70% of the stock is owned by corporate insiders.

Several equities research analysts have recently weighed in on the stock. StockNews.com assumed coverage on shares of CEVA in a research report on Thursday, March 31st. They set a “buy” rating for the company. Rosenblatt Securities upgraded shares of CEVA from a “neutral” rating to a “buy” rating and increased their price objective for the stock from $50.00 to $60.00 in a research report on Wednesday, February 16th. One analyst has rated the stock with a sell rating and six have assigned a buy rating to the company’s stock. Based on data from MarketBeat, the stock presently has a consensus rating of “Buy” and an average price target of $60.83. 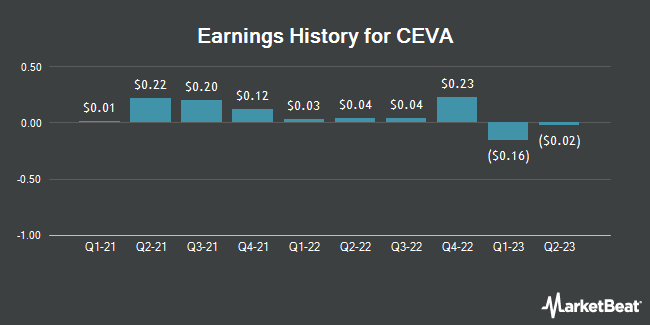 Receive News & Ratings for CEVA Daily - Enter your email address below to receive a concise daily summary of the latest news and analysts' ratings for CEVA and related companies with MarketBeat.com's FREE daily email newsletter.

Complete the form below to receive the latest headlines and analysts' recommendations for CEVA with our free daily email newsletter: