DTE Energy (NYSE:DTE – Get Rating) had its price objective raised by Citigroup from $134.00 to $146.00 in a report released on Tuesday, The Fly reports. Citigroup’s price objective suggests a potential upside of 11.65% from the stock’s current price.

DTE Energy (NYSE:DTE – Get Rating) last announced its quarterly earnings data on Thursday, April 28th. The utilities provider reported $2.31 earnings per share (EPS) for the quarter, beating the consensus estimate of $2.08 by $0.23. DTE Energy had a return on equity of 13.58% and a net margin of 5.59%. During the same period in the previous year, the company earned $2.44 EPS. As a group, equities research analysts forecast that DTE Energy will post 5.94 EPS for the current fiscal year.

In other DTE Energy news, SVP Joann Chavez sold 500 shares of the business’s stock in a transaction on Wednesday, February 16th. The stock was sold at an average price of $116.58, for a total value of $58,290.00. The sale was disclosed in a filing with the Securities & Exchange Commission, which is available through the SEC website. Also, CAO Tracy J. Myrick sold 600 shares of the firm’s stock in a transaction that occurred on Friday, March 4th. The shares were sold at an average price of $124.99, for a total transaction of $74,994.00. The disclosure for this sale can be found here. Insiders have sold a total of 4,350 shares of company stock valued at $537,461 over the last 90 days. Insiders own 0.61% of the company’s stock. 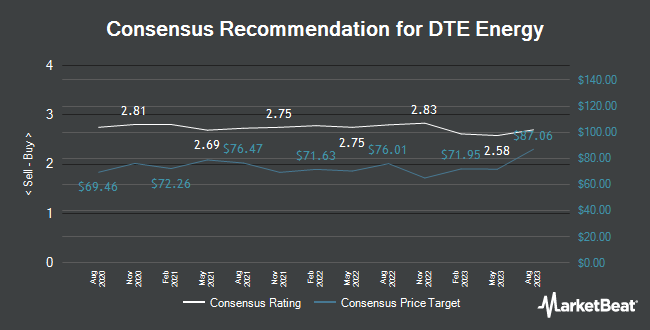 Complete the form below to receive the latest headlines and analysts' recommendations for DTE Energy with our free daily email newsletter: