Deciphera Pharmaceuticals (NASDAQ:DCPH – Get Rating) last announced its quarterly earnings results on Tuesday, February 8th. The company reported ($1.51) earnings per share (EPS) for the quarter, missing the Thomson Reuters’ consensus estimate of ($1.49) by ($0.02). The firm had revenue of $24.20 million for the quarter, compared to analyst estimates of $23.28 million. Deciphera Pharmaceuticals had a negative net margin of 306.78% and a negative return on equity of 72.17%. The firm’s quarterly revenue was up 24.3% compared to the same quarter last year. During the same quarter in the prior year, the firm earned ($1.10) earnings per share. On average, analysts expect Deciphera Pharmaceuticals to post $-3 EPS for the current fiscal year and $-2 EPS for the next fiscal year.

Separately, Barclays lowered Deciphera Pharmaceuticals from an “equal weight” rating to an “underweight” rating and reduced their price target for the company from $11.00 to $6.00 in a report on Monday, February 28th. Two analysts have rated the stock with a sell rating, six have given a hold rating and three have given a buy rating to the stock. Based on data from MarketBeat.com, Deciphera Pharmaceuticals presently has an average rating of “Hold” and a consensus price target of $23.11.

In related news, major shareholder Brightstar Associates Llc bought 1,478,978 shares of Deciphera Pharmaceuticals stock in a transaction that occurred on Friday, April 29th. The stock was purchased at an average cost of $10.00 per share, for a total transaction of $14,789,780.00. Following the acquisition, the insider now owns 18,051,348 shares in the company, valued at $180,513,480. The acquisition was disclosed in a document filed with the SEC, which is accessible through the SEC website. Over the last 90 days, insiders sold 3,718 shares of company stock valued at $33,648. Corporate insiders own 4.10% of the company’s stock.

Deciphera Pharmaceuticals, Inc, a biopharmaceutical company, develops drugs to enhance the lives of cancer patients by addressing key mechanisms of drug resistance that limit the rate and durability of response to existing cancer therapies in the United States and internationally. Its lead drug candidate is QINLOCK used for the treatment of gastrointestinal stromal tumors (GIST), as well as in INTRIGUE Phase 3 study to treat second-line GIST. 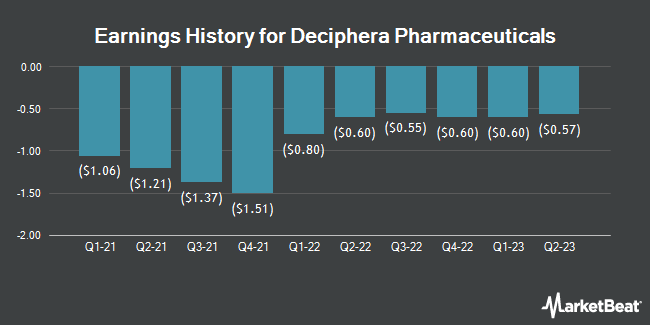 Salisbury Bancorp Stock Scheduled to Split on Tuesday, May 31st

Complete the form below to receive the latest headlines and analysts' recommendations for Deciphera Pharmaceuticals with our free daily email newsletter: