Inter Parfums (NASDAQ:IPAR – Get Rating) is scheduled to announce its earnings results after the market closes on Tuesday, May 10th. Analysts expect the company to announce earnings of $0.94 per share for the quarter. Inter Parfums has set its FY 2022 guidance at $3.000-$3.000 EPS and its FY22 guidance at $3.00 EPS.Investors that wish to listen to the company’s conference call can do so using this link.

Inter Parfums (NASDAQ:IPAR – Get Rating) last issued its quarterly earnings results on Tuesday, March 1st. The company reported ($0.04) earnings per share for the quarter, beating the Zacks’ consensus estimate of ($0.16) by $0.12. The firm had revenue of $210.72 million for the quarter, compared to analyst estimates of $171.25 million. Inter Parfums had a net margin of 9.94% and a return on equity of 11.92%. Inter Parfums’s quarterly revenue was up 14.5% compared to the same quarter last year. During the same period last year, the company posted $0.47 EPS. On average, analysts expect Inter Parfums to post $3 EPS for the current fiscal year and $3 EPS for the next fiscal year.

In other news, CFO Philippe Santi sold 2,000 shares of the business’s stock in a transaction dated Tuesday, February 8th. The shares were sold at an average price of $98.87, for a total transaction of $197,740.00. The sale was disclosed in a document filed with the SEC, which can be accessed through the SEC website. Insiders own 44.50% of the company’s stock.

About Inter Parfums (Get Rating) 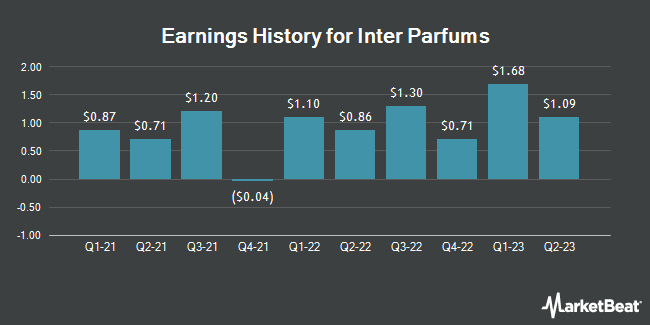