Kemper (NYSE:KMPR – Get Rating) announced its quarterly earnings data on Monday. The insurance provider reported ($0.94) earnings per share for the quarter, beating the Thomson Reuters’ consensus estimate of ($1.17) by $0.23, MarketWatch Earnings reports. Kemper had a negative return on equity of 5.21% and a negative net margin of 2.07%. During the same period in the previous year, the business posted $1.31 earnings per share.

The firm also recently declared a quarterly dividend, which was paid on Tuesday, March 1st. Stockholders of record on Monday, February 14th were given a $0.31 dividend. The ex-dividend date was Friday, February 11th. This represents a $1.24 dividend on an annualized basis and a dividend yield of 2.63%. Kemper’s payout ratio is -63.27%.

In other Kemper news, Director George N. Cochran purchased 1,000 shares of the company’s stock in a transaction dated Monday, February 14th. The stock was bought at an average cost of $50.00 per share, for a total transaction of $50,000.00. The acquisition was disclosed in a legal filing with the Securities & Exchange Commission, which is available at this link. 0.71% of the stock is currently owned by insiders. 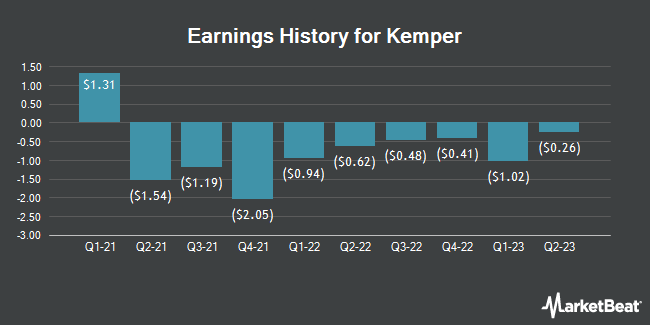