Midwich Group plc (LON:MIDW – Get Rating) announced a dividend on Tuesday, March 8th, Upcoming.Co.Uk reports. Investors of record on Thursday, May 5th will be given a dividend of GBX 7.80 ($0.10) per share on Friday, June 17th. This represents a yield of 1.58%. The ex-dividend date is Thursday, May 5th. This is an increase from Midwich Group’s previous dividend of $3.30. The official announcement can be viewed at this link.

Separately, Berenberg Bank restated a “buy” rating and set a GBX 780 ($9.74) price objective on shares of Midwich Group in a report on Wednesday, March 23rd.

Midwich Group plc, together with its subsidiaries, engages in the distribution of audio visual (AV) solutions to the trade customers in the United Kingdom, Ireland, Europe, the Middle East, Africa, Asia Pacific, and North America. Its products support various AV categories, such as displays, projectors, audio, video, and digital signage, as well as lighting and unified communications. 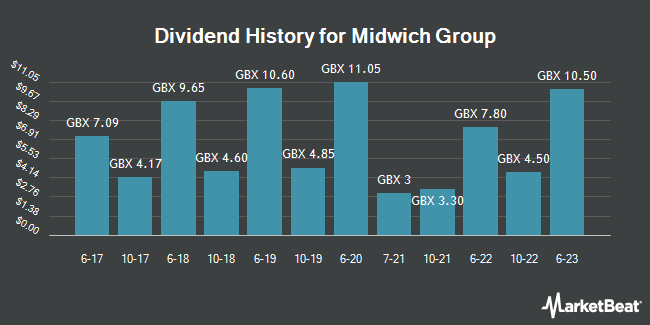 Complete the form below to receive the latest headlines and analysts' recommendations for Midwich Group with our free daily email newsletter: