NanoString Technologies (NASDAQ:NSTG – Get Rating) last released its quarterly earnings data on Tuesday, March 1st. The biotechnology company reported ($0.64) EPS for the quarter, missing the consensus estimate of ($0.55) by ($0.09). NanoString Technologies had a negative net margin of 79.44% and a negative return on equity of 55.40%. The company had revenue of $42.46 million during the quarter, compared to analysts’ expectations of $41.90 million. During the same period last year, the business earned ($0.53) earnings per share. The company’s revenue for the quarter was up 17.1% compared to the same quarter last year. On average, analysts expect NanoString Technologies to post $-2 EPS for the current fiscal year and $-2 EPS for the next fiscal year.

NanoString Technologies, Inc develops, manufactures, and sells tools for scientific and clinical research in the fields of genomics and proteomics in the Americas, Europe, the Middle East, and the Asia Pacific. The company offers nCounter Analysis System, an automated, multi-application, digital detection, and counting system. 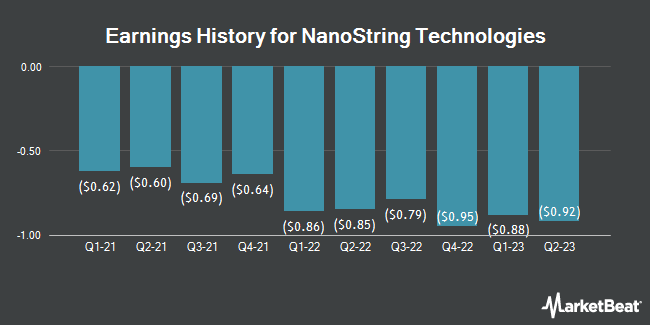 $0.25 Earnings Per Share Expected for Braemar Hotels & Resorts This Quarter

Coinbase Global, Inc. Given Average Rating of “Buy” by Analysts

Complete the form below to receive the latest headlines and analysts' recommendations for NanoString Technologies with our free daily email newsletter: