Novavax (NASDAQ:NVAX – Get Rating) will be releasing its earnings data after the market closes on Monday, May 9th. Analysts expect Novavax to post earnings of $3.33 per share for the quarter. Novavax has set its FY 2022 guidance at EPS.Persons interested in participating in the company’s earnings conference call can do so using this link.

Novavax (NASDAQ:NVAX – Get Rating) last announced its quarterly earnings results on Monday, February 28th. The biopharmaceutical company reported ($11.18) earnings per share (EPS) for the quarter, missing the Zacks’ consensus estimate of ($1.43) by ($9.75). The business had revenue of $222.20 million during the quarter, compared to analyst estimates of $331.79 million. Novavax had a negative net margin of 152.12% and a negative return on equity of 368.20%. The business’s revenue for the quarter was down 20.5% compared to the same quarter last year. During the same period last year, the company earned ($2.70) earnings per share. On average, analysts expect Novavax to post $23 EPS for the current fiscal year and $14 EPS for the next fiscal year.

In other news, Director James F. Young sold 12,500 shares of the company’s stock in a transaction that occurred on Thursday, March 31st. The stock was sold at an average price of $73.58, for a total transaction of $919,750.00. Following the completion of the sale, the director now owns 62,590 shares in the company, valued at $4,605,372.20. The transaction was disclosed in a document filed with the Securities & Exchange Commission, which is available through the SEC website. 2.10% of the stock is owned by corporate insiders.

About Novavax (Get Rating) 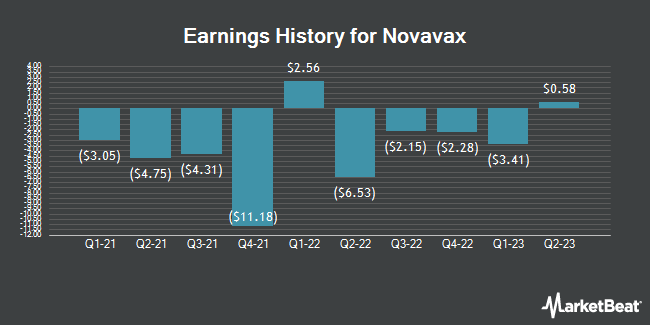