ONE Gas (NYSE:OGS – Get Rating) issued its earnings results on Monday. The utilities provider reported $1.83 EPS for the quarter, missing the Zacks’ consensus estimate of $1.90 by ($0.07), MarketWatch Earnings reports. ONE Gas had a return on equity of 8.90% and a net margin of 11.41%. During the same quarter in the previous year, the business earned $1.79 EPS.

Several brokerages recently issued reports on OGS. Bank of America raised shares of ONE Gas from a “neutral” rating to a “buy” rating and set a $83.00 price objective on the stock in a report on Thursday, February 17th. StockNews.com assumed coverage on shares of ONE Gas in a report on Thursday, March 31st. They set a “sell” rating on the stock. Morgan Stanley raised their target price on shares of ONE Gas from $82.00 to $89.00 and gave the company an “equal weight” rating in a research note on Wednesday, April 20th. Finally, Mizuho downgraded shares of ONE Gas from a “buy” rating to a “neutral” rating and set a $92.00 target price for the company. in a research note on Friday. One analyst has rated the stock with a sell rating, three have given a hold rating and two have given a buy rating to the stock. According to data from MarketBeat.com, the company currently has a consensus rating of “Hold” and a consensus target price of $85.25.

In other news, Director Michael G. Hutchinson sold 750 shares of ONE Gas stock in a transaction on Friday, March 11th. The shares were sold at an average price of $86.12, for a total transaction of $64,590.00. The transaction was disclosed in a filing with the Securities & Exchange Commission, which can be accessed through this hyperlink. Insiders own 1.38% of the company’s stock.

ONE Gas Company Profile (Get Rating) 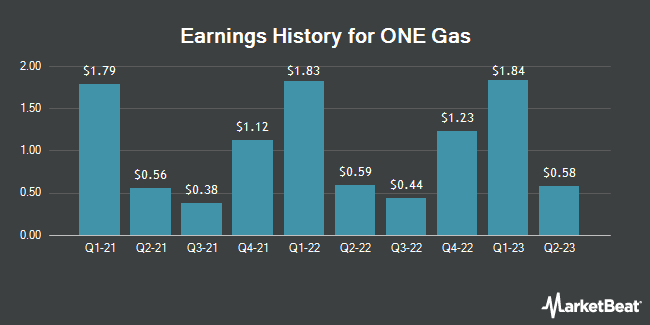 Receive News & Ratings for ONE Gas Daily - Enter your email address below to receive a concise daily summary of the latest news and analysts' ratings for ONE Gas and related companies with MarketBeat.com's FREE daily email newsletter.

Daily Ratings & News for ONE Gas

Complete the form below to receive the latest headlines and analysts' recommendations for ONE Gas with our free daily email newsletter: