PDC Energy, Inc. (NASDAQ:PDCE – Get Rating) has been given an average recommendation of “Buy” by the twelve analysts that are currently covering the company, MarketBeat reports. One equities research analyst has rated the stock with a hold rating and seven have given a buy rating to the company. The average 1 year price objective among brokerages that have updated their coverage on the stock in the last year is $81.78.

PDC Energy (NASDAQ:PDCE – Get Rating) last released its quarterly earnings results on Monday, February 28th. The energy producer reported $2.86 EPS for the quarter, beating the Thomson Reuters’ consensus estimate of $2.40 by $0.46. The firm had revenue of $854.64 million for the quarter, compared to analyst estimates of $691.65 million. PDC Energy had a net margin of 28.15% and a return on equity of 31.34%. Equities research analysts predict that PDC Energy will post 16.27 EPS for the current fiscal year. 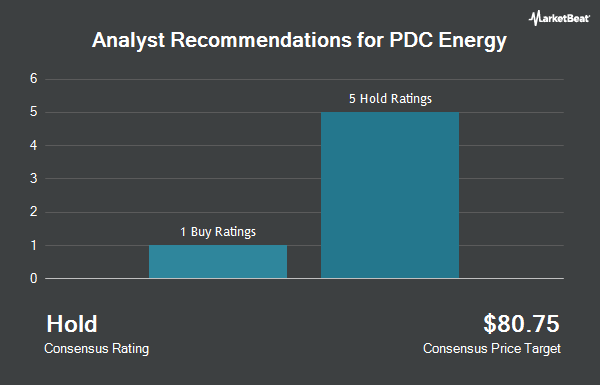