Switch (NYSE:SWCH – Get Rating) will be announcing its earnings results after the market closes on Tuesday, May 10th. Analysts expect the company to announce earnings of $0.05 per share for the quarter. Switch has set its FY 2022 guidance at EPS.Investors interested in listening to the company’s conference call can do so using this link.

Switch (NYSE:SWCH – Get Rating) last posted its quarterly earnings results on Thursday, February 24th. The company reported $0.03 EPS for the quarter, missing analysts’ consensus estimates of $0.05 by ($0.02). The company had revenue of $161.40 million during the quarter, compared to analyst estimates of $162.40 million. Switch had a return on equity of 3.50% and a net margin of 0.91%. The company’s revenue for the quarter was up 26.4% compared to the same quarter last year. During the same quarter in the previous year, the business posted $0.06 earnings per share. On average, analysts expect Switch to post $0 EPS for the current fiscal year and $0 EPS for the next fiscal year.

The business also recently declared a quarterly dividend, which was paid on Tuesday, March 22nd. Shareholders of record on Friday, March 11th were issued a $0.052 dividend. This represents a $0.21 dividend on an annualized basis and a yield of 0.67%. The ex-dividend date was Thursday, March 10th. Switch’s payout ratio is 420.00%. 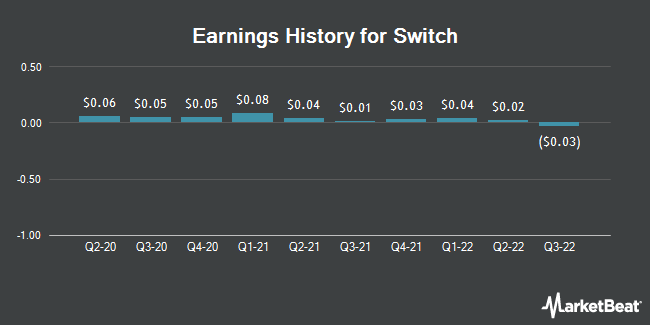