United States Steel Co. (NYSE:X – Get Rating) CAO Manpreet Grewal sold 3,505 shares of the business’s stock in a transaction that occurred on Friday, April 29th. The shares were sold at an average price of $33.00, for a total transaction of $115,665.00. Following the completion of the sale, the chief accounting officer now directly owns 23,913 shares in the company, valued at $789,129. The transaction was disclosed in a legal filing with the SEC, which is accessible through the SEC website.

United States Steel (NYSE:X – Get Rating) last announced its quarterly earnings data on Thursday, April 28th. The basic materials company reported $3.05 EPS for the quarter, beating the Zacks’ consensus estimate of $2.95 by $0.10. United States Steel had a net margin of 23.01% and a return on equity of 57.72%. The company had revenue of $5.23 billion for the quarter, compared to the consensus estimate of $5.26 billion. During the same period in the prior year, the firm posted $1.08 EPS. The company’s quarterly revenue was up 42.8% compared to the same quarter last year. As a group, equities research analysts expect that United States Steel Co. will post 10.13 EPS for the current year.

The business also recently announced a quarterly dividend, which will be paid on Wednesday, June 8th. Stockholders of record on Monday, May 9th will be issued a $0.05 dividend. This represents a $0.20 annualized dividend and a dividend yield of 0.67%. The ex-dividend date is Friday, May 6th. United States Steel’s payout ratio is 1.16%.

About United States Steel (Get Rating) 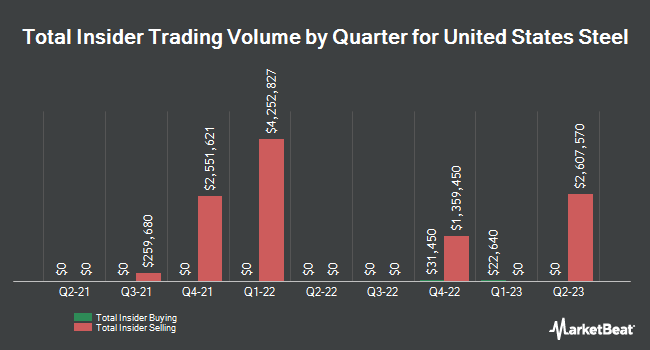 Invesco BulletShares 2030 Corporate Bond ETF Short Interest Up 4,133.3% in May

Complete the form below to receive the latest headlines and analysts' recommendations for United States Steel with our free daily email newsletter: