Zimmer Biomet (NYSE:ZBH – Get Rating) posted its quarterly earnings results on Tuesday. The medical equipment provider reported $1.61 earnings per share for the quarter, beating the Zacks’ consensus estimate of $1.40 by $0.21, MarketWatch Earnings reports. Zimmer Biomet had a return on equity of 12.30% and a net margin of 5.12%. The company had revenue of $1.66 billion for the quarter, compared to analysts’ expectations of $1.59 billion. During the same period last year, the firm earned $1.71 earnings per share. Zimmer Biomet’s quarterly revenue was up 3.9% on a year-over-year basis. Zimmer Biomet updated its FY22 guidance to $6.65-6.85 EPS.

The business also recently declared a quarterly dividend, which was paid on Friday, April 29th. Stockholders of record on Tuesday, March 29th were given a dividend of $0.24 per share. The ex-dividend date was Monday, March 28th. This represents a $0.96 annualized dividend and a dividend yield of 0.78%. Zimmer Biomet’s payout ratio is 50.53%.

In other Zimmer Biomet news, VP Chad F. Phipps sold 35,149 shares of the firm’s stock in a transaction that occurred on Thursday, March 17th. The shares were sold at an average price of $121.97, for a total value of $4,287,123.53. The sale was disclosed in a document filed with the SEC, which is accessible through this hyperlink. Company insiders own 0.73% of the company’s stock.

About Zimmer Biomet (Get Rating)

Zimmer Biomet Holdings, Inc, together with its subsidiaries, operates in the musculoskeletal healthcare business in the Americas, Europe, the Middle East, Africa, and the Asia Pacific. The company designs, manufactures, and markets orthopaedic reconstructive products, such as knee and hip products; S.E.T. 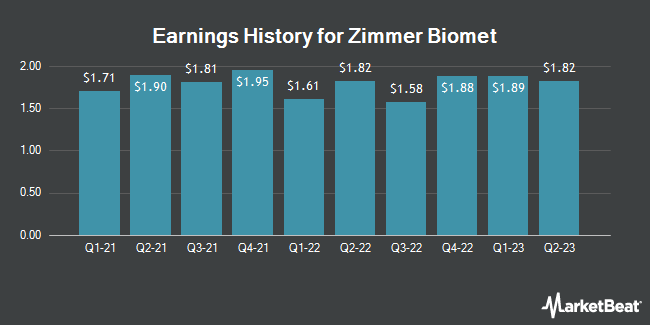 $1.40 Billion in Sales Expected for Capri Holdings Limited This Quarter

$103.31 Million in Sales Expected for Frontline Ltd. This Quarter

Complete the form below to receive the latest headlines and analysts' recommendations for Zimmer Biomet with our free daily email newsletter: