According to Zacks, analysts expect that Horace Mann Educators will report full-year sales of $1.36 billion for the current year, with estimates ranging from $1.32 billion to $1.40 billion. For the next fiscal year, analysts expect that the firm will post sales of $1.38 billion, with estimates ranging from $1.34 billion to $1.43 billion. Zacks Investment Research’s sales averages are an average based on a survey of analysts that follow Horace Mann Educators.

Horace Mann Educators (NYSE:HMN – Get Rating) last announced its quarterly earnings data on Tuesday, February 1st. The insurance provider reported $0.97 earnings per share (EPS) for the quarter, topping the Thomson Reuters’ consensus estimate of $0.72 by $0.25. The business had revenue of $331.40 million during the quarter, compared to the consensus estimate of $333.40 million. Horace Mann Educators had a net margin of 10.74% and a return on equity of 8.51%. The firm’s quarterly revenue was down 5.9% compared to the same quarter last year. During the same quarter last year, the firm earned $1.13 earnings per share.

HMN has been the subject of several analyst reports. StockNews.com initiated coverage on shares of Horace Mann Educators in a research note on Thursday, March 31st. They issued a “hold” rating for the company. Zacks Investment Research lowered shares of Horace Mann Educators from a “buy” rating to a “hold” rating in a research report on Tuesday, April 5th.

In other news, SVP Kimberly A. Johnson sold 1,500 shares of the firm’s stock in a transaction that occurred on Thursday, February 10th. The shares were sold at an average price of $41.27, for a total transaction of $61,905.00. The sale was disclosed in a document filed with the SEC, which is available through the SEC website. Company insiders own 3.20% of the company’s stock.

About Horace Mann Educators (Get Rating) 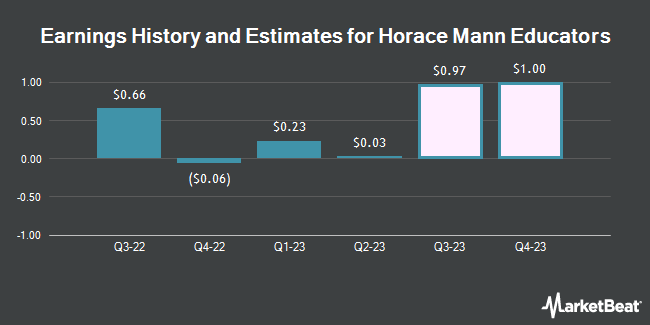 Complete the form below to receive the latest headlines and analysts' recommendations for Horace Mann Educators with our free daily email newsletter: