$532.19 Million in Sales Expected for HEICO Co. (NYSE:HEI) This Quarter

Equities analysts expect HEICO Co. (NYSE:HEI – Get Rating) to announce $532.19 million in sales for the current fiscal quarter, according to Zacks. Three analysts have provided estimates for HEICO’s earnings, with the highest sales estimate coming in at $540.21 million and the lowest estimate coming in at $524.57 million. HEICO posted sales of $466.65 million during the same quarter last year, which suggests a positive year over year growth rate of 14%. The business is expected to announce its next quarterly earnings report on Monday, January 1st.

On average, analysts expect that HEICO will report full year sales of $2.14 billion for the current financial year, with estimates ranging from $2.12 billion to $2.17 billion. For the next fiscal year, analysts expect that the business will post sales of $2.36 billion, with estimates ranging from $2.32 billion to $2.39 billion. Zacks Investment Research’s sales averages are a mean average based on a survey of analysts that that provide coverage for HEICO.

HEICO (NYSE:HEI – Get Rating) last issued its quarterly earnings data on Wednesday, February 23rd. The aerospace company reported $0.63 EPS for the quarter, beating the consensus estimate of $0.56 by $0.07. HEICO had a net margin of 16.54% and a return on equity of 14.22%. The company had revenue of $490.30 million during the quarter, compared to analysts’ expectations of $493.52 million. During the same quarter in the previous year, the company earned $0.51 earnings per share. HEICO’s revenue for the quarter was up 17.3% on a year-over-year basis.

HEI has been the subject of a number of recent analyst reports. Truist Financial upgraded shares of HEICO from a “hold” rating to a “buy” rating in a report on Friday, January 7th. StockNews.com lowered shares of HEICO from a “buy” rating to a “hold” rating in a research note on Tuesday. Three research analysts have rated the stock with a hold rating and four have issued a buy rating to the company. According to data from MarketBeat.com, the stock presently has a consensus rating of “Buy” and a consensus price target of $152.17. 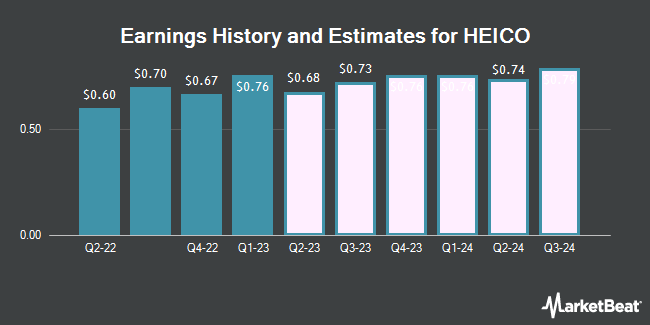