Southern Copper (NYSE:SCCO – Get Rating) last announced its quarterly earnings data on Wednesday, February 2nd. The basic materials company reported $1.08 EPS for the quarter, missing the consensus estimate of $1.12 by ($0.04). The company had revenue of $2.82 billion during the quarter, compared to the consensus estimate of $2.61 billion. Southern Copper had a return on equity of 42.58% and a net margin of 31.07%. On average, equities research analysts expect that Southern Copper will post 4.16 earnings per share for the current year.

Several analysts have commented on SCCO shares. StockNews.com raised shares of Southern Copper from a “buy” rating to a “strong-buy” rating in a research report on Monday. Barclays lifted their price objective on shares of Southern Copper from $58.00 to $62.00 in a research report on Thursday, April 21st. Finally, Morgan Stanley lowered shares of Southern Copper from an “equal weight” rating to an “underweight” rating and lifted their price objective for the stock from $55.00 to $63.00 in a research report on Wednesday, March 23rd. Two analysts have rated the stock with a sell rating, three have assigned a hold rating and one has given a strong buy rating to the stock. According to MarketBeat.com, the company currently has an average rating of “Hold” and a consensus price target of $61.30.

In other news, Chairman German Larrea Mota Velasco sold 200,000 shares of Southern Copper stock in a transaction dated Friday, March 11th. The shares were sold at an average price of $74.94, for a total value of $14,988,000.00. The transaction was disclosed in a filing with the Securities & Exchange Commission, which is available at this hyperlink. 0.08% of the stock is owned by company insiders.

Southern Copper Corporation engages in mining, exploring, smelting, and refining copper and other minerals in Peru, Mexico, Argentina, Ecuador, and Chile. The company is involved in the mining, milling, and flotation of copper ore to produce copper and molybdenum concentrates; smelting of copper concentrates to produce blister and anode copper; refining of anode copper to produce copper cathodes; production of molybdenum concentrate and sulfuric acid; production of refined silver, gold, and other materials; and mining and processing of zinc and lead. 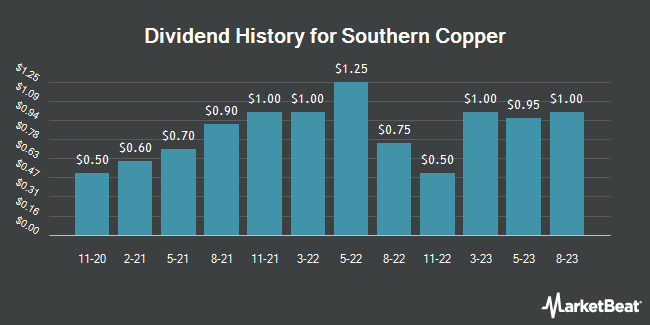 Complete the form below to receive the latest headlines and analysts' recommendations for Southern Copper with our free daily email newsletter: