According to Zacks, analysts expect that Nabriva Therapeutics will report full year earnings of ($0.67) per share for the current fiscal year, with EPS estimates ranging from ($0.73) to ($0.61). For the next financial year, analysts anticipate that the firm will post earnings of ($0.34) per share, with EPS estimates ranging from ($0.35) to ($0.33). Zacks’ EPS averages are a mean average based on a survey of research firms that cover Nabriva Therapeutics.

Nabriva Therapeutics (NASDAQ:NBRV – Get Rating) last announced its quarterly earnings results on Tuesday, March 29th. The biotechnology company reported ($0.24) earnings per share (EPS) for the quarter, missing the consensus estimate of ($0.19) by ($0.05). The company had revenue of $9.26 million for the quarter, compared to analyst estimates of $10.30 million. Nabriva Therapeutics had a negative return on equity of 82.13% and a negative net margin of 171.14%. During the same quarter last year, the company posted ($1.11) earnings per share.

About Nabriva Therapeutics (Get Rating)

Nabriva Therapeutics plc, a biopharmaceutical company, engages in the development and commercialization of novel anti-infective agents to treat serious infections. The company's product includes SIVEXTRO, an oxazolidinone-class antibacterial for the treatment of acute bacterial skin and skin structure infection (ABSSSI); and XENLETA, a semi-synthetic pleuromutilin antibiotic for the treatment of community-acquired bacterial pneumonia. 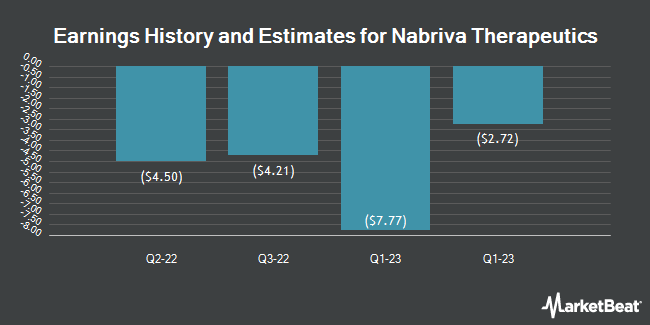 Complete the form below to receive the latest headlines and analysts' recommendations for Nabriva Therapeutics with our free daily email newsletter: