Equities research analysts expect Ralph Lauren Co. (NYSE:RL – Get Rating) to announce sales of $1.46 billion for the current quarter, Zacks Investment Research reports. Five analysts have provided estimates for Ralph Lauren’s earnings. The highest sales estimate is $1.47 billion and the lowest is $1.43 billion. Ralph Lauren reported sales of $1.29 billion during the same quarter last year, which would suggest a positive year over year growth rate of 13.2%. The business is scheduled to announce its next quarterly earnings report before the market opens on Monday, January 1st.

According to Zacks, analysts expect that Ralph Lauren will report full year sales of $6.15 billion for the current financial year, with estimates ranging from $6.12 billion to $6.16 billion. For the next fiscal year, analysts forecast that the company will report sales of $6.39 billion, with estimates ranging from $6.33 billion to $6.44 billion. Zacks’ sales calculations are a mean average based on a survey of sell-side research firms that that provide coverage for Ralph Lauren.

Ralph Lauren (NYSE:RL – Get Rating) last announced its quarterly earnings results on Thursday, February 3rd. The textile maker reported $2.94 earnings per share (EPS) for the quarter, beating the Zacks’ consensus estimate of $2.17 by $0.77. The business had revenue of $1.82 billion during the quarter, compared to the consensus estimate of $1.65 billion. Ralph Lauren had a net margin of 8.38% and a return on equity of 22.59%. The business’s revenue was up 26.7% compared to the same quarter last year. During the same quarter last year, the firm posted $1.67 EPS.

Ralph Lauren announced that its Board of Directors has approved a share repurchase program on Thursday, February 3rd that permits the company to buyback $1.50 billion in shares. This buyback authorization permits the textile maker to purchase up to 17.3% of its stock through open market purchases. Stock buyback programs are typically an indication that the company’s board of directors believes its stock is undervalued.

The company also recently declared a quarterly dividend, which was paid on Friday, April 15th. Stockholders of record on Friday, April 1st were issued a dividend of $0.6875 per share. The ex-dividend date was Thursday, March 31st. This represents a $2.75 dividend on an annualized basis and a dividend yield of 2.56%. Ralph Lauren’s dividend payout ratio (DPR) is presently 41.23%.

About Ralph Lauren (Get Rating) 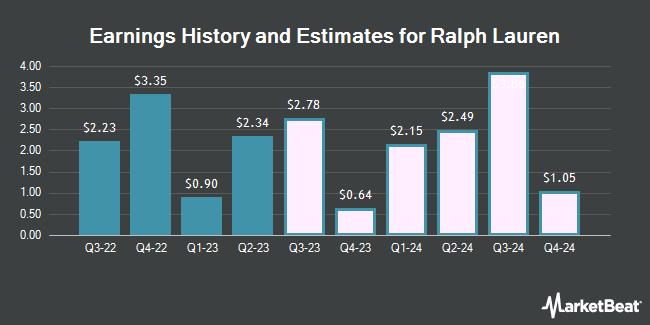 CarParts.com Upgraded by StockNews.com to “Hold”

MercadoLibre Upgraded to Hold by StockNews.com

Complete the form below to receive the latest headlines and analysts' recommendations for Ralph Lauren with our free daily email newsletter: