Co-Diagnostics (NASDAQ:CODX – Get Rating) is scheduled to be issuing its quarterly earnings data after the market closes on Thursday, May 12th. Analysts expect the company to announce earnings of $0.18 per share for the quarter. Co-Diagnostics has set its Q1 2022 guidance at $0.170-$0.200 EPS.Parties that are interested in registering for the company’s conference call can do so using this link.

Co-Diagnostics (NASDAQ:CODX – Get Rating) last announced its quarterly earnings data on Thursday, March 24th. The company reported $0.25 EPS for the quarter, beating the Zacks’ consensus estimate of $0.15 by $0.10. Co-Diagnostics had a return on equity of 36.83% and a net margin of 37.45%. The firm had revenue of $20.40 million during the quarter, compared to analysts’ expectations of $21.50 million. During the same quarter last year, the firm posted $0.43 earnings per share. On average, analysts expect Co-Diagnostics to post $1 EPS for the current fiscal year and $1 EPS for the next fiscal year.

CODX has been the subject of a number of research reports. Zacks Investment Research cut Co-Diagnostics from a “buy” rating to a “hold” rating in a research note on Wednesday, March 30th. HC Wainwright restated a “buy” rating and issued a $15.00 target price on shares of Co-Diagnostics in a report on Friday, March 25th. Two research analysts have rated the stock with a hold rating and three have given a buy rating to the stock. According to MarketBeat.com, Co-Diagnostics currently has a consensus rating of “Buy” and a consensus target price of $12.00.

About Co-Diagnostics (Get Rating)

Co-Diagnostics, Inc, a molecular diagnostics company, develops, manufactures, and sells reagents used for diagnostic tests that function through the detection and/or analysis of nucleic acid molecules in the United States and internationally. It offers polymerase chain reaction (PCR) diagnostic tests for COVID-19, tuberculosis, hepatitis B and C, human papilloma virus, malaria, chikungunya, dengue, and the zika virus; three multiplexed tests to test mosquitos for the identification of diseases carried by the mosquitos; and molecular tools for detection of infectious diseases, liquid biopsy for cancer screening, and agricultural applications. 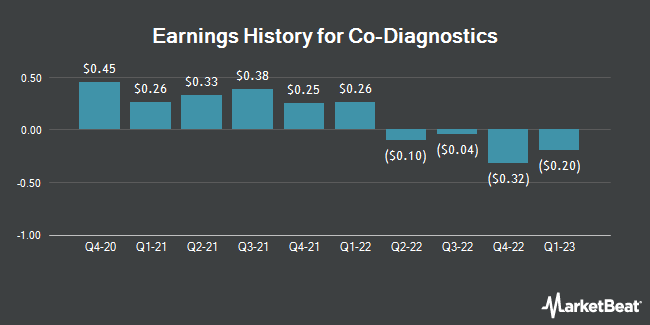 NuVasive, Inc. Given Average Recommendation of “Hold” by Analysts

VNET Group, Inc. Given Average Rating of “Hold” by Analysts

Complete the form below to receive the latest headlines and analysts' recommendations for Co-Diagnostics with our free daily email newsletter: