Cullen/Frost Bankers, Inc. (NYSE:CFR – Get Rating) Director Chris Avery bought 5,000 shares of Cullen/Frost Bankers stock in a transaction that occurred on Monday, May 2nd. The shares were acquired at an average price of $131.55 per share, with a total value of $657,750.00. Following the completion of the transaction, the director now owns 17,000 shares of the company’s stock, valued at $2,236,350. The purchase was disclosed in a filing with the Securities & Exchange Commission, which is available through this hyperlink.

Cullen/Frost Bankers (NYSE:CFR – Get Rating) last posted its quarterly earnings results on Thursday, April 28th. The bank reported $1.50 earnings per share (EPS) for the quarter, topping the consensus estimate of $1.47 by $0.03. Cullen/Frost Bankers had a return on equity of 10.40% and a net margin of 30.15%. During the same quarter last year, the business posted $1.77 EPS. As a group, research analysts predict that Cullen/Frost Bankers, Inc. will post 7.5 EPS for the current year.

The company also recently announced a quarterly dividend, which will be paid on Wednesday, June 15th. Investors of record on Tuesday, May 31st will be paid a $0.75 dividend. This represents a $3.00 annualized dividend and a dividend yield of 2.20%. The ex-dividend date is Friday, May 27th. Cullen/Frost Bankers’s payout ratio is 46.15%. 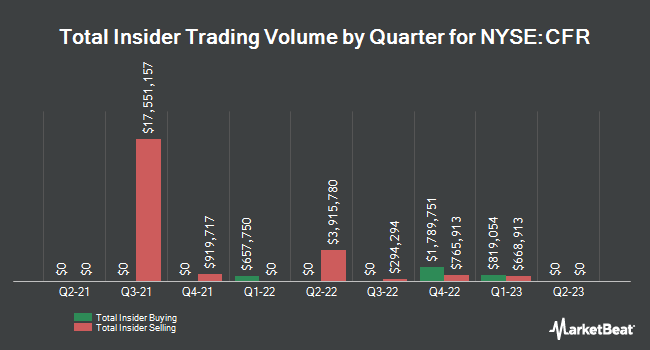