Hercules Capital, Inc. (NYSE:HTGC – Get Rating) declared a quarterly dividend on Wednesday, May 4th, Wall Street Journal reports. Stockholders of record on Tuesday, May 17th will be given a dividend of 0.33 per share by the financial services provider on Tuesday, May 24th. This represents a $1.32 annualized dividend and a dividend yield of 7.63%. The ex-dividend date of this dividend is Monday, May 16th.

Hercules Capital (NYSE:HTGC – Get Rating) last announced its quarterly earnings data on Tuesday, February 22nd. The financial services provider reported $0.35 EPS for the quarter, topping the Zacks’ consensus estimate of $0.33 by $0.02. Hercules Capital had a return on equity of 11.28% and a net margin of 61.98%. The business had revenue of $72.50 million during the quarter, compared to the consensus estimate of $70.86 million. During the same period in the previous year, the company posted $0.37 earnings per share. The business’s revenue for the quarter was down 3.7% on a year-over-year basis. On average, analysts anticipate that Hercules Capital will post 1.35 EPS for the current fiscal year.

About Hercules Capital (Get Rating) 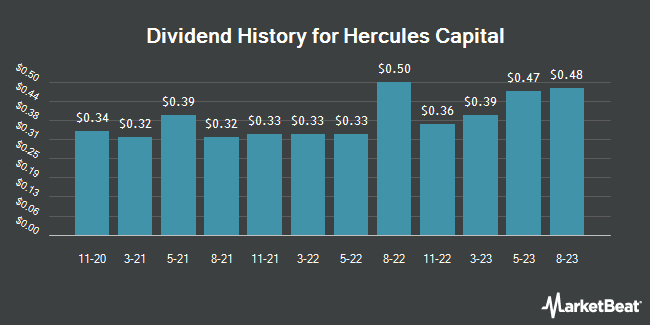