Immersion (NASDAQ:IMMR – Get Rating) will announce its earnings results after the market closes on Thursday, May 12th.

Immersion (NASDAQ:IMMR – Get Rating) last issued its earnings results on Thursday, February 24th. The software maker reported $0.16 earnings per share (EPS) for the quarter. The company had revenue of $9.75 million for the quarter. Immersion had a net margin of 35.58% and a return on equity of 14.92%.

A number of research firms recently commented on IMMR. StockNews.com assumed coverage on Immersion in a research report on Thursday, March 31st. They set a “hold” rating for the company. Zacks Investment Research downgraded shares of Immersion from a “hold” rating to a “sell” rating in a report on Monday, February 28th.

About Immersion (Get Rating)

Immersion Corporation, together with its subsidiaries, invents, scales, and licenses haptic technologies that allow people to use their sense of touch to engage with and experience various digital products in North America, Europe, and Asia. The company provides technology, patent, and combined licenses. 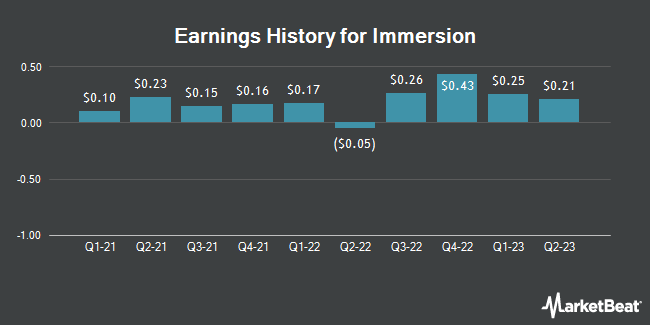 $0.59 EPS Expected for The Interpublic Group of Companies, Inc. This Quarter

NCC Group plc Given Consensus Recommendation of “Buy” by Analysts

Zumiez Inc. Given Average Recommendation of “Hold” by Brokerages

Coterra Energy Inc. Given Average Rating of “Hold” by Brokerages

Complete the form below to receive the latest headlines and analysts' recommendations for Immersion with our free daily email newsletter: