Matador Resources (NYSE:MTDR – Get Rating) Director Monika U. Ehrman purchased 200 shares of Matador Resources stock in a transaction that occurred on Wednesday, May 4th. The stock was acquired at an average cost of $51.51 per share, with a total value of $10,302.00. Following the acquisition, the director now directly owns 27,963 shares in the company, valued at approximately $1,440,374.13. The acquisition was disclosed in a document filed with the SEC, which can be accessed through this hyperlink.

Matador Resources (NYSE:MTDR – Get Rating) last issued its earnings results on Tuesday, April 26th. The energy company reported $2.32 earnings per share (EPS) for the quarter, beating the Thomson Reuters’ consensus estimate of $1.92 by $0.40. Matador Resources had a return on equity of 34.63% and a net margin of 37.28%. During the same period in the previous year, the company posted $0.71 earnings per share. On average, equities research analysts expect that Matador Resources will post 10.53 EPS for the current year.

The company also recently disclosed a quarterly dividend, which will be paid on Friday, June 3rd. Investors of record on Wednesday, May 18th will be given a dividend of $0.05 per share. This represents a $0.20 annualized dividend and a yield of 0.37%. The ex-dividend date of this dividend is Tuesday, May 17th. Matador Resources’s payout ratio is currently 3.26%.

About Matador Resources (Get Rating) 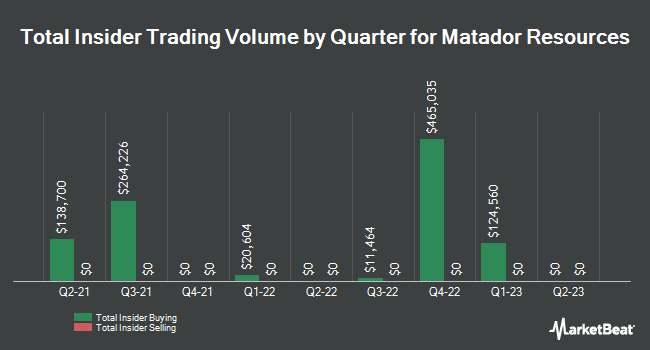 $33.38 Million in Sales Expected for FuelCell Energy, Inc. This Quarter

$56.40 Million in Sales Expected for Heritage Financial Co. This Quarter